The Golden Chariot train is South India's only luxury train. It takes its name from the Stone Chariot in historic Hampi, one of many places it visits as it winds its way through Karnataka. You'll travel through the night to various locations and spend the day exploring them. The Karnataka Tourism Development Corporation owns the train, which is operated by the Indian Railway Catering and Tourism Corporation.

It began its operations in early 2008, making it one of the more recent additions to India's luxury train fleet. Its logo features a mythological creature with the head of an elephant and the body of a lion.

One of the most exciting and luxurious ways to see the natural and architectural treasures of south India is to travel on the Golden Chariot train. Golden Chariot has received numerous accolades for its modern refinement and traditional ways of hospitality, including being named one of the world's seven best luxury rail journeys by Vanity Fair Magazine within four years of its inception.

Rajasthan Tourism and Development Corporation (RTDC) introduced the Palace on Wheels train, which marked the beginning of luxury train travel in India. The resounding success of Palace on Wheels inspired other state tourism departments to follow in RTDC's footsteps, resulting in the introduction of Royal Rail Journeys in India's South Western Region.

The Golden Chariot, South India's first and only luxury train, is the fruit of a 2002 agreement between the Karnataka State Tourism and Development Corporation (KSTDC) and the Ministry of Indian Railways. This luxury train in India is named after Hampi's famous stone chariot. 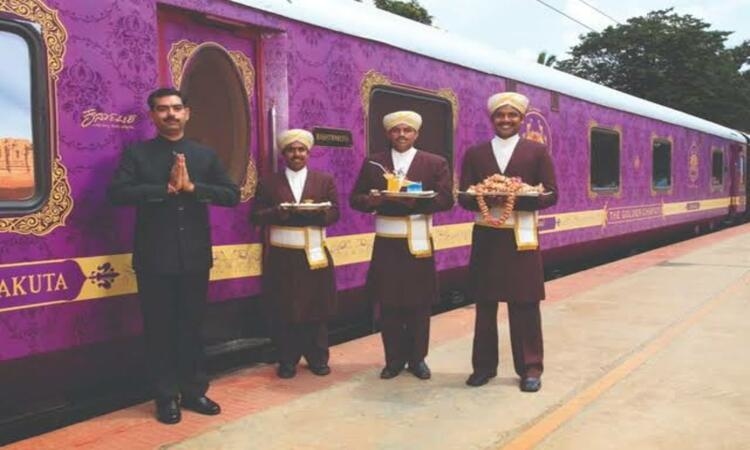 On February 2, 2008, President Pratibha Devi Singh Patil presented the Golden Chariot with a ceremonial presidential flag off at Yeshwanthpur Railway Station. Golden Chariot chugged on its maiden voyage from Bangalore to Goa on March 10, 2008, weaving through various historically significant and culturally potent destinations in Karnataka. 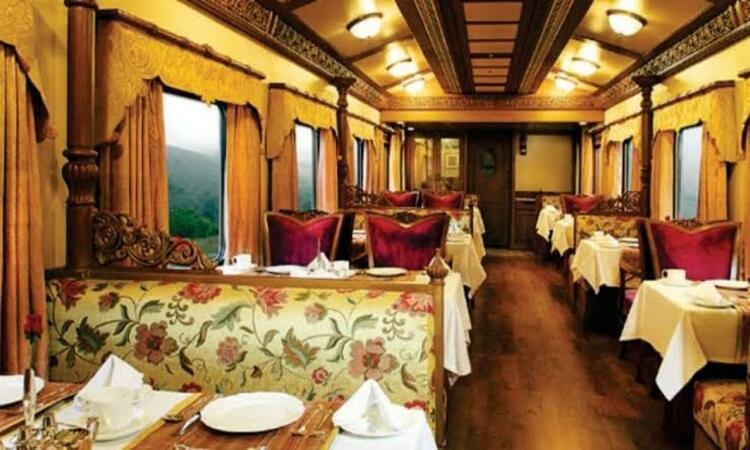 There are 11 purple and gold-themed passenger carriages with 44 air-conditioned guest cabins (four in each carriage) and an attendant for each cabin. There are 13 double bed cabins, 30 twin bed cabins, and one cabin for people with disabilities.

Each carriage of The Golden Chariot is named after a Karnataka ruling dynasty, including the Kadamba, Hoysala, Rastrakota, Ganga, Chalukya, Bhahamani, Adhilshahi, Sangama, Shathavashna, Yudukula, and Vijayanagar.

There are also two speciality restaurants (Ruchi and Nalapaka), a lounge bar (Madira), business facilities, a gym, and a wellness spa offering massage therapies on the train. One of the highlights is performances by local artists in the train's lounge bar, which has been designed to look like a replica of the Mysore Palace.

The Golden Chariot has three routes and itineraries, all of which depart early Sunday morning from Bangalore's Yeshwantpur Railway Station.

Departure Dates of The Golden Chariot in 2022-23

The train runs only on pre-scheduled dates and the booking must be done well in advance from the departure date. The Golden Chariot starts its journey only on Sundays. Here are the dates on which this train will start its journey in the year 2022-23:

Why Travel Through Golden Chariot?

It's a fantastic way to see south India in comfort and without hassle. The itinerary includes stops at national parks and ancient temples, as well as cultural, historical, and wildlife connections. Excursions are meticulously planned. Furthermore, alcohol is now included in the tariff (it used to be charged separately and was costly). Despite the fact that it is a luxury train, there is no formal dress code.