In 2014, I decided to travel to South India on my vacation. I reached Ernakulam from New Delhi and then the South Indian expedition began. Finally we reached Madurai and proceeded for Rameshwaram-Island City. Also one of the char dhams of India and an ardent place for Hindu Devotees, Rameshwaram was definitely on my bucket list. We boarded the Madurai-Rameswaram Passenger (56725) at 18:10 from Madurai. The coaches were almost vacant. I was exhausted and drowsy. Around 9 PM I heard growling sounds of sea crashing on the rocks. I got up after hearing the sound and turned on the torch of my phone. I was amazed to see water everywhere. Then I realized I was on the prodigious Pamban Bridge . Since it was night time, I was not able to get the proper view. On return journey from Rameshwaram to Chennai I boarded Boat Mail (16102) and reached the door beforehand and had an amazing view of the sea. The bay was attractive and clean. I was astounded by this marvel. I researched more of these marvels in India as Pamban Bridge intrigued me a lot. So here is the list and some insights of the most wonderful and breathtaking railway bridges of India that will surely leave your experience surreal.

This First Cantilever bridge of India, also known as Bridge No.346 in Indian Railway reference, consists of over 140 spans. It has an amazing feature of a double-leaf section that can be raised to allow movement of ships and boats. The bridge opens into two so that the ferries and ships can cross Palk Strait that connects Rameswaram and Pamban Island. The split of the bridge is a sight to peculiarity! This was designed by German engineer Scherzer. The 114th span, midway along the bridge is called the Scherzer span. 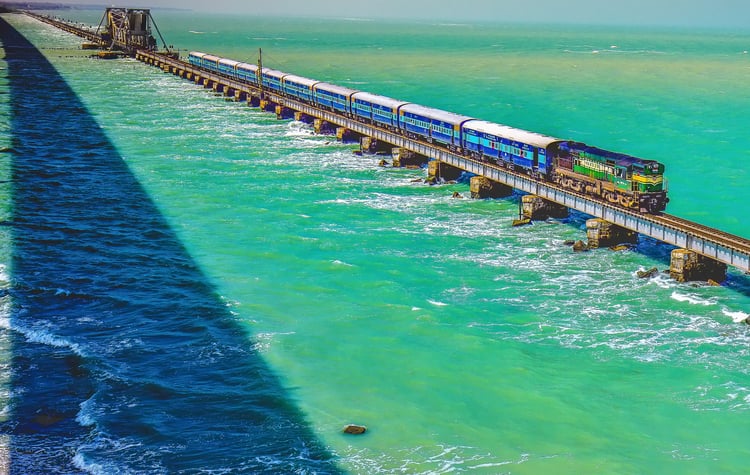 It is interesting to know that the Pamban bridge had withstood a horrible cyclone in 1964. Though a huge damage was occurred on the bridge and many of its parts were washed away. According to the chief construction engineer of the Indian Railways, the bridge is situated in the second most corrosive environment in the world next to Florida, U.S and thus maintenance of this bridge is a huge challenge. It is also on cyclone prone and high velocity wind zone. Train movement on the bridge is halted when the wind speed exceeds 58 kmph. It was only in 2007 that the railway line on Pamban bridge was converted from metre-gauge to broad-gauge. It is also considered as one of the most dangerous railway bridges of the world. 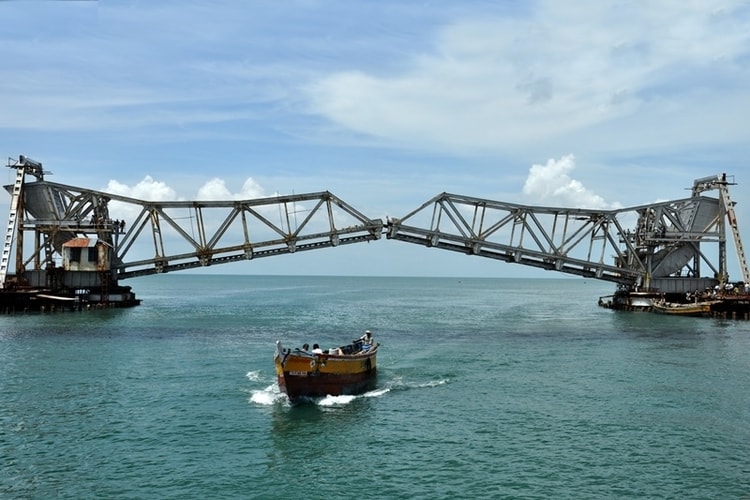 2. The Vembanad Bridge
The Vembanad Rail Bridge is the most beautiful bridge in Kerala that connects Edapally and Vallarpadan in Kochi. It is considered as one of the longest railway bridge in India with the total length of 4.62 km. This bridge allows 15 trains to pass daily and only goods train run on this bridge. Passenger trains do not run on this bridge. Thus the railway line is dedicated only for shipment. The construction of the bridge started in June 2007 and ended on 31 March 2010.

It is built over the backwaters of Vembanad Lake and passes through three small islands(Idyakkara and Mulavukadu). 80% of the bridge is constructed over water. Vembanad Lake is the longest lake in India and the largest lake of Kerala and is also ranked as one of the largest Indian lakes that is famous for stunning Snake Boat Races during the festival of Onam .

Vembanad Bridge flies over the picturesque backwaters and string of islands off the coast of Kochi. Official sources said that naming a rail bridge was basically for identification and since Vembanad was the backwaters that surrounded Kochi so it was chosen as the ideal name. Despite the enormity of the work involved and the challenges, the work was executed as per the time schedule. 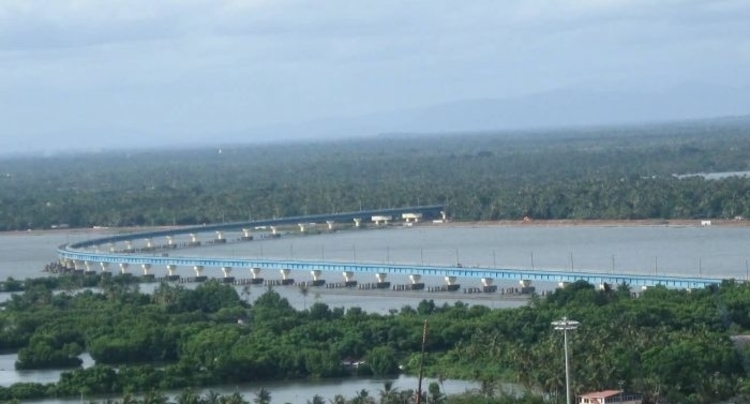 3. The Panvalnadi Bridge
The Panvalnadi Bridge on the Panval river in Ratnagiri District of Maharashtra is also one of the most picturesque and beautiful railway bridge. It is Asia’s second tallest viaduct and presently the tallest bridge in India. The tallest pier of the bridge is 64 m and the length of the bridge is around 425 m. The bridge was built for Konkan Railway and was the first bridge built in India using the incremental launching technique. The bridge superstructure is a single-cell continuous prestressed concrete box girder with nine intermediate 40m spans and two end spans of 30m each. The substructure consists of hollow octagonal reinforced concrete piers resting on open foundations. In 1995, the bridge received the Most Outstanding Concrete Structure in India Award from the American Concrete Institute.

However, soon the bridge will lose its coveted title of being the tallest bridge in India. Currently railway line between Katra and Laole in Jammu & Kashmir is being laid down by the Konkan Railways. There will be two bridges that will be taller than the Panvalnadi Bridge. One will be over River Chenab with a height of 359m while the other will be over Anji Khad at a height of 189m. Both are under construction. 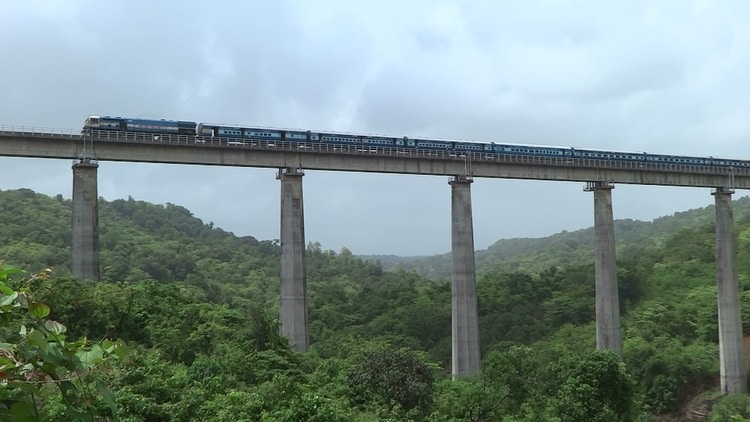 4. The Godavari Arch Bridge
The Godavari Arch Bridge too is in the category of most stunning architectures constructed by Indian Railways. It is a bowstring-girder bridge means in which the outward-directed horizontal forces of the arch(es) are borne as tension by a chord tying both arch ends, taking the thrust as tension(you’ll get this only if you are an architecture freak). It is built over the Godavari River in Rajahmundry, Andhra Pradesh. It is the latest of the three bridges that span the Godavari River at Rajahmundry. The Havelock Bridge being the earliest, was built in 1897, and having served its full utility, was decommissioned in 1997. The second bridge known as the Godavari Bridge is a truss bridge and is Asia's second longest railroad bridge. 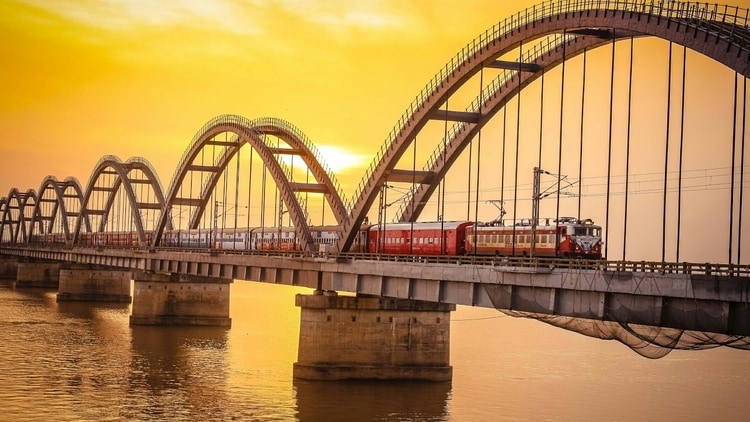 This bridge is one of the longest span prestressed concrete arch bridges in Asia. This is a single track rail bridge which has been designed to run trains at a speed of 160 miles (260 km) per hour. The bridge is located in two channels, the Kovvur channel and the Rajahmundry channel, and hence the bridge is also known as the Kovvur-Rajahmundry Bridge. Construction of this bridge started in 1991 and completed in 1997 by Hindustan Construction Company.

Indian Railways who built this bridge have stated that "It is perhaps for the first time anywhere in the world that a bowstring arch girder using concrete has been constructed for such a long span of 97.55 metres (320.0 ft), and that too for the Railway loading." It has been widely used to represent Rajahmundry in arts, media, and culture. It is one of the recognized symbols of Rajahmundry.

This 2.7km long Bridge is shadowed by stunning parabolic arches making it one of the most striking architecture in the country.

5. The Saraighat Bridge
This beautiful bridge is the first rail cum road bridge on the Brahmaputra River near Guwahati, Assam which was built to connect North-East India with the rest of the country. It’s construction was started in January 1959 and was opened for passenger traffic on 7 June 1963 by the then Prime Minister Pt. Jawahar Lal Nehru. The 1.4 kilometres long river bridge connects both banks of Brahmaputra at Saraighat. This is a double decker bridge with a national highway on top and railway tracks below. The bridge was built for the North Frontier Railway thus, they are responsible for maintenance of this bridge. The bridge is named after a village Sarai and has remained intact even after five decades of service.

All the 11 pillars of the bridge are stable. Besides a huge volume of vehicular and passenger traffic, the bridge also bears the weight of 85 goods and passenger trains running over it every day. The bridge was constructed at a cost of Rs 10.65 crore (Rs 106.5 million). It is an iconic structure which supports the major transportation in the North East. 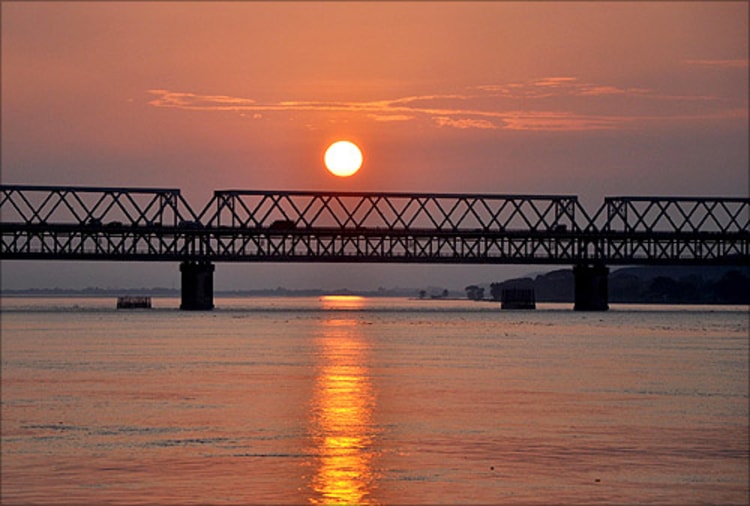 6. The Chenab River Bridge
Chenab Bridge is going to be the most stupendous and remarkable railway bridges of India. It is a railway steel and concrete arch bridge under construction between Bakkal and Kauri in the Reasi district of Jammu & Kashmir, India. When finished the bridge will span the Chenab River at a height of 359m(1,178 ft) above the river, making it the World’s highest rail bridge. The bridge is scheduled to open in 2019 which is being constructed over the most complicated and isolated terrains. It is expected to be 35 meters taller than Eiffel Tower.

Chenab Bridge is designed to be blast proof, wind proof and seismic resistant. It can withstand earthquakes measuring up to eight on the Richter scale and high-intensity blasts. A detailed, site-specific seismic analysis has been carried out by experts from the Indian Institute of Technology (IIT), Roorkee, and the Indian Institute of Science (IISc), Bangalore. It is said that it can withstand a blast of 30Kg of explosives. The bridge has also been designed with anti-terror features in consultation with the Defense Research and Development Organization (DRDO). It is also said to withstand winds up to 260 kmph and its lifespan will be 120 years. It would be delirious to witness this marvel of engineering! 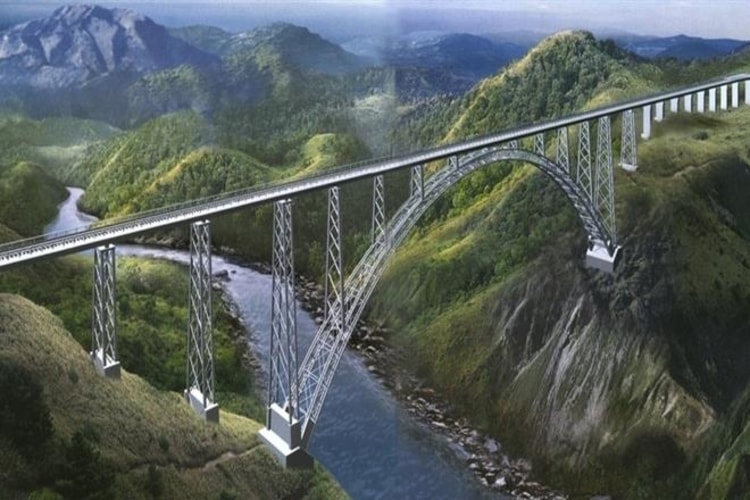 This bridge at Honnavar was awarded second prize in the competition for Most outstanding Bridge National Awards 1995 – Category I by Indian Institute of Bridge Engineers in 1995.

Sharavathi river is originated from Linganamakki Dam in the Sagara Taluk and flows towards west, one of the westward flowing rivers of India. The river basin lies in the Western Ghats which is home to rare species of flora and fauna and forms the famous Jog Waterfalls . 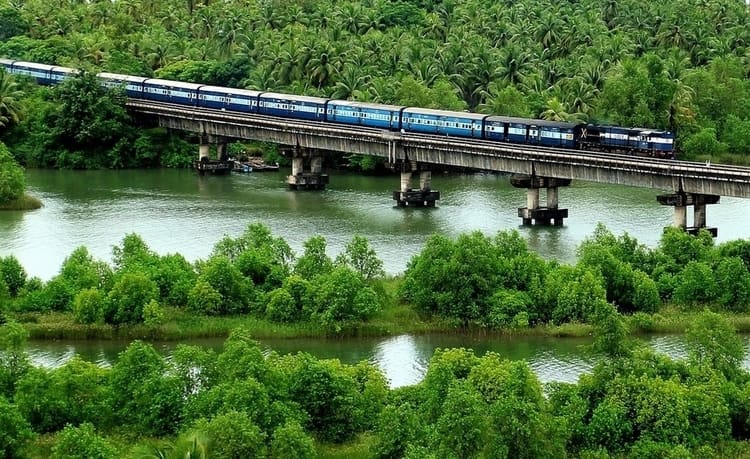 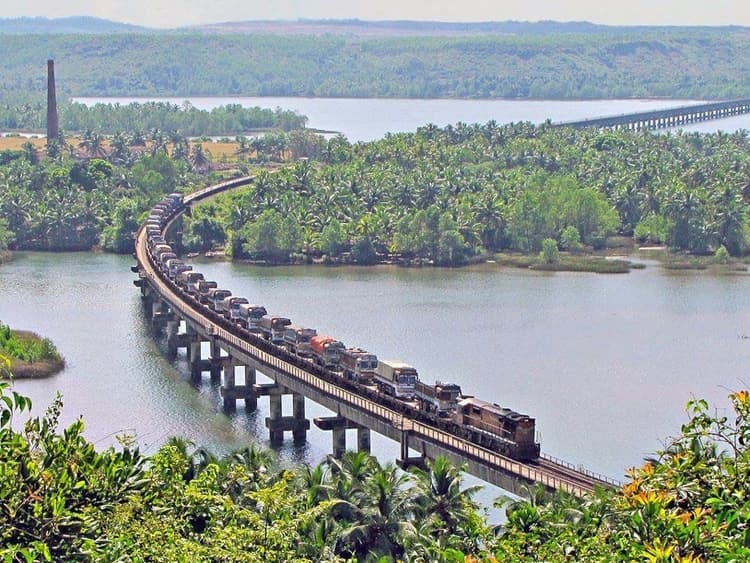