Vaishno Devi is one of the manifestations of the goddess Durga, and the temple is among the 108 Maha Shakti Peeth dedicated to her. It is one of India's most important pilgrimage sites, receiving millions of pilgrims and devotees annually.

The number of visitors goes up to one crore during festivals such as Navaratri. Besides Hindus, the temple is sacred to Sikhs and has even been visited by Guru Gobind Singh, the last of the 10 Sikh Gurus.

The exact date or period when the temple was first constructed is unknown, and one can be sure it has relatively ancient origins. Many say that the temple was built long before the period of the Mahabharata, and the Trikuta Hills have even been mentioned in such ancient texts as the Rig Ved.

Arjun is said to have gone up to the hills of “Jambhu” to seek the blessings of the goddess Vaishno Devi before going into battle at the advice of Lord Krishna. “Jambhu” is said to correspond to modern-day Jammu. While worshipping her, Arjuna declared her to be the highest yogin, wholly liberated from decay and decrepitude.

It is generally believed that the Pandavas were the first to erect temples dedicated to the goddess at Kol Kandoli and Bhawan. Even today, visitors can see five stone structures in a mountain adjacent to Trikuta Hills overlooking the temple.

As mentioned earlier, Vaishno Devi Temple is one of the country's most famous Hindu pilgrimage sites. Every year the temple is thronged by devotees not just from India but all over the world.

The pilgrims reach the temple and the holy cave where it is located by trekking around 12 km, starting from the base camp at Katra. They will then culminate their pilgrimage with a Darshan of the goddess inside the sanctum sanctorum. 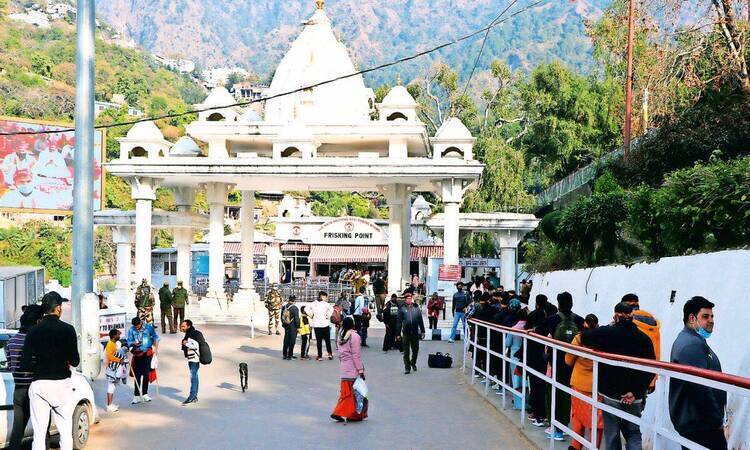 The most notable festivals celebrated at the temple are Navratri and Diwali. Navaratri is celebrated for nine days to commemorate Devi’s victory over demons. Diwali is a festival of lights, signifying a triumph of light over darkness, knowledge over ignorance, and good over evil.

There is good news for devotees and pilgrims looking to visit Vaishno Devi. Travellers from Delhi to Vaishno Devi have the option of commuting with the Vande Bharat Express Train. The train has been operational since 2019 and is the fastest train in India. It helps commuters to reach their destination almost in half the time. Additionally, all Vande Bharat trains are fully air-conditioned and loaded with world-class features.

The Train schedules are as follows:

There are various trains to Katra from New Delhi. However, the total duration of the journey varies from 08 to 13 hours. A few of the trains are:

This Navratri, are you planning to visit Vaishno Devi? Not yet? Well, bookings are already open. Plan your journey and book your train tickets at the lowest price with Trainman.