A train journey has a rhythm, you begin gently, pick up speed, tread on the rail tracks, then imperceptibly regain a state of repose. Train travel reflects the rhythm of life, the changes of pace, the highs and lows. When travelling inside the train, the soothing sound of the wheels, picturesque scenery outside the window, glimpse of the open fields, all of these things are sure to stir up the feelings of excitement in a traveler. But there are railways around the world which are surprisingly extreme and scary, railways that traverses deep gorges and near vertical descents, tracks that are lined up through rough and dangerous terrain. There are some rails that connect a mainland with islands, and some that are besieged by the dangerous mountain passes. While treading on these railways, there can be any surprise outside the window for the passengers, there can be a deep quarry, menacing gorges, steep cliffs or even the ocean. These railway routes will certainly surge the adrenaline of even the most intrepid travelers.

So fasten your seatbelts! The ride ahead in this blog may get a little bumpy as we go through on a journey through the world’s most extreme railways!!

1. Pilatus Railway, Switzerland
The Pilatus Railway is a mountain railway in Switzerland and is the steepest railway track in the world, with a maximum gradient of 48% and an average gradient of 35%. It connects Alpnachstad on Lake Lucerne, to a terminus near the summit of Mount Pilatus at an altitude of 2,073 meter. The track climbs a slope of more than 1,600 meters in just 4.6 km, making it the steepest track railway in the world. This railroad is steeper than the steepest street in the world (Baldwin Street). It takes 30 minutes to bridge the difficult and dangerous distance. On the final section of the route the train passes through the narrow tunnel, at the exit from which passengers can immediately see the edge of the cliff. 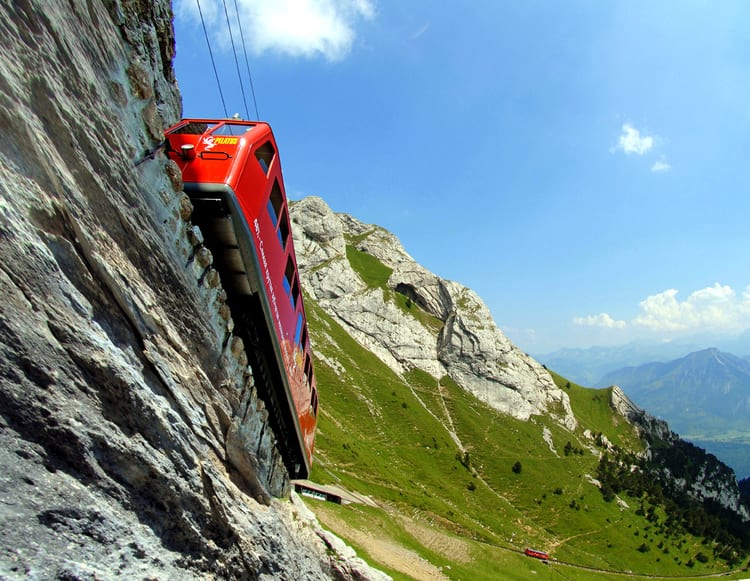 Eduard Locher, a famous engineer with great practical experience worked on this project and devised a unique cogwheel system. The ingenious design with two horizontally rotating cogwheels made it possible to move a train forward at such a steep gradient. This masterpiece was exhibited at the World Fair 1889 in Paris. The system eliminated the possibility of the cogwheels climbing out of the rack, and additionally prevented the car from toppling over, even under the severe crosswinds common in the area. The line was opened using steam traction on 4 June 1889 and was electrified on 15 May 1937, using an overhead electric supply of 1550 V DC.

The rail contains a total of 10 red carriages, designed to hold 40 passengers. The carriages move with a speed not exceeding 12 km/h, which allows to transport up to 340 passengers hourly. 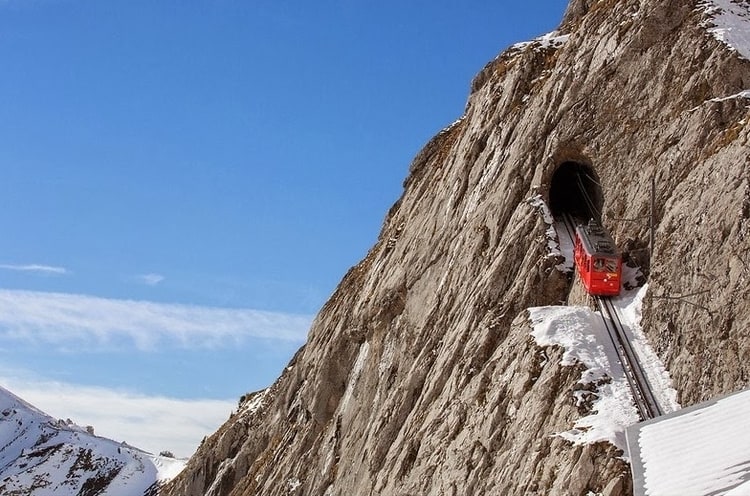 The route operates between May and November, when the cog railway is not buried by snow, with trains departing every 45 minutes during the day. In winter, access to Mount Pilatus is possible via cable car.

This extreme railways passing through alpine meadows and striking rock formations is sure to give goosebumps to even the bravest of travelers.

2. Cumbres and Toltec Scenic Railroad, Colorado
The Cumbres & Toltec Scenic Railroad is a 3 foot narrow gauge heritage railroad in the state of Colorado, U.S. It runs for 64 miles (103 km) between Antonito, Colorado and Chama, New Mexico, United States. The railroad gets its name from two geographical features along the route, the 10,015 ft (3,053 m) high Cumbres Pass and Toltec Gorge. The train crosses the bridge over Toltec gorge and more than 3 kilometres continues on Cumbres mountain pass. The 800 foot deep walls of the Toltec Gorge are steep and rocky and at times the train seems almost pressed in by rock on both sides.

The rail line over which the Cumbres & Toltec operates was constructed in 1881 by the Denver and Rio Grande Western Railroad(D&RGW). In 1968, freight traffic was virtually gone and the railroad began the process of abandoning the line. However, the states of Colorado and New Mexico purchased the 64 mile portion between Antonito and Chama in 1970. This railroad also got featured in several documentaries and films. 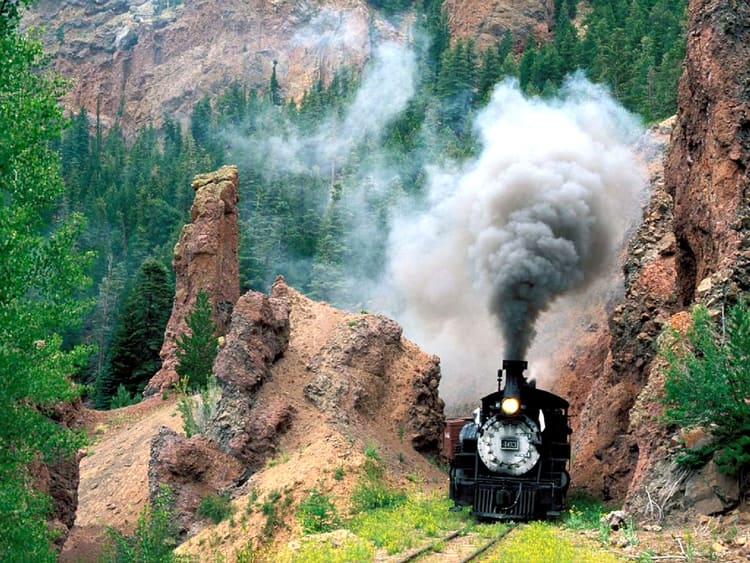 3. Tren a las Nubes, Argentina
This legendary and remarkable train to the clouds is one of South America’s great railway journeys. It is a tourist train that service Salta province in Argentina. The railroad is a sight of a global value. On the 217-km rail line there are 29 formidable bridges, 21 tunnels, 13 viaducts and a huge number of ascents and descents. Tourists have more than enough chances to feel an adrenaline rush, that’s what has made this railroad so extremely popular.

The construction of the unique railway that passes through the mountain ranges and the deepest canyons, began in 1921. It took just under 30 years to build the railroad in that harsh terrain. The complete railway came into operation in 1948.

The line has a number of interesting features, such as zigzags and spirals. Such a structure allows the trains to avoid steep grades, but because of this decision some parts of the way does not seem safe at all. Initially built for the economic reasons and the needs of the local population, it now operates primarily for the benefit of tourists. It reaches its highest point 4,220 m at La Polvorilla, making it the sixth highest railways in the world.

4. Outeniqua Choo-Tjoe Train, South Africa
The Outeniqua Choo-Tjoe railroad runs along the coast of the Western Cape in South Africa and is the most dangerous and spectacular in the country. The railroad was built in 1928 and links the towns of George and Knysna. The length of the line is 67 kilometres, however, a one-way journey lasts 3 hours. The first railway along the coast was actually constructed in 1908, but because of the serious accident that occured in a couple of days after its opening, the movement was suspended for the next 20 years.

The Kaaimans Bridge is considered the most dangerous stretch of track. It hangs over the Indian Ocean. The precarious railroad gained popularity among tourists as in 1993, 115000 travellers used the rail out of which 70% were the foreigners. Travelling over this train will help travelers to gain a whole range of unforgettable impressions. 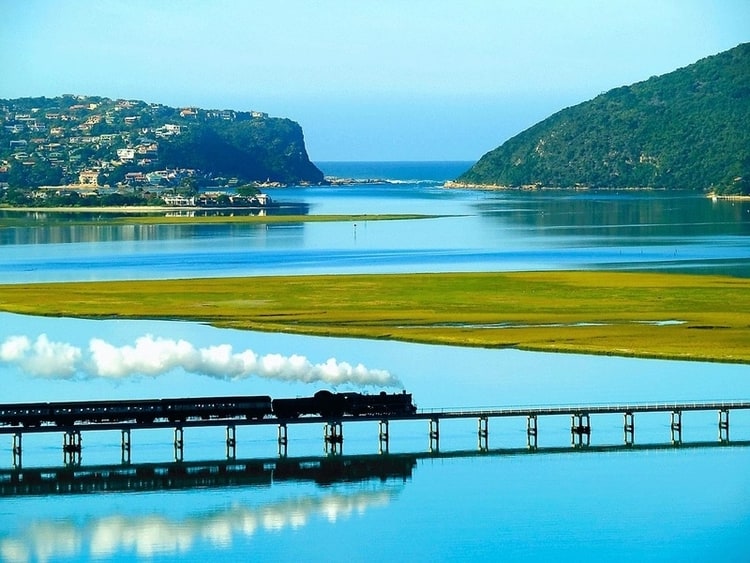 5. Chennai-Rameswaram Route, India
To reach Rameshwaram island in the south of India, there are a number of ways but one of the extreme way is to reach Rameshwaram by train. The train travels over the bridge named “Pamban Bridge” which is stretched over the sea. Being one of the char dhams of India and an ardent place for Hindu Devotees, Rameshwaram is visited by a huge number of people from all around the world. The Pamban Railway bridge was constructed in 1914 and has a length of 2.075 kms.

The sea is very rough here, and a storm comes almost every day. It is also on cyclone prone and high velocity wind zone. Train movement on the bridge is halted when the wind speed exceeds 58 kmph. The adventurers must surely take a trip on this extreme railway bridge and experience the surreal and untainted beauty of the sea. 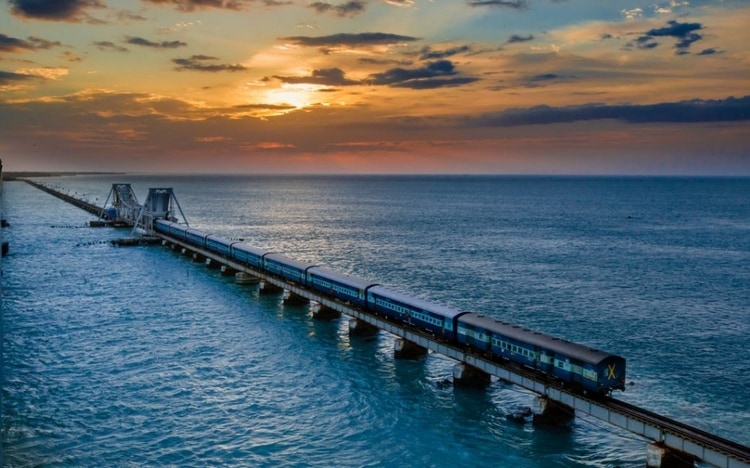 6. White Pass and Yukon Route, Alaska
The White Pass and Yukon Route is a Canadian and US narrow gauge railroad linking the port of Skagway, Alaska with Whitehorse, the capital of Yukon. An isolated system, it has no direct connection to any other railroad. Equipment, freight and passengers are ferried by ship through the Port of Skagway, and via road through a few of the stops along its route.

The total length of the railway system is 175 kilometres, and the most dangerous part of it lies in Alaska. This specific section attracts thrill-seekers from all over the world. On the 32-km rail line several bridges passing over deep gorges and cliffs are found. Some bridge supports are still made of wood. The extended railway bridges are followed by narrow and dark tunnels, followed again by beautiful and at the same time frightening mountain scenery.

The railroad builder of this route, “Big” Mike Heney said that, “Give me enough dynamite and snoose, and I’ll build you a railroad to hell.” Built in 1898 during the Klondike Gold Rush, the White Pass & Yukon Route is a marvel of engineering despite the harsh weather and challenging geography faced by thousands of railroad construction workers. 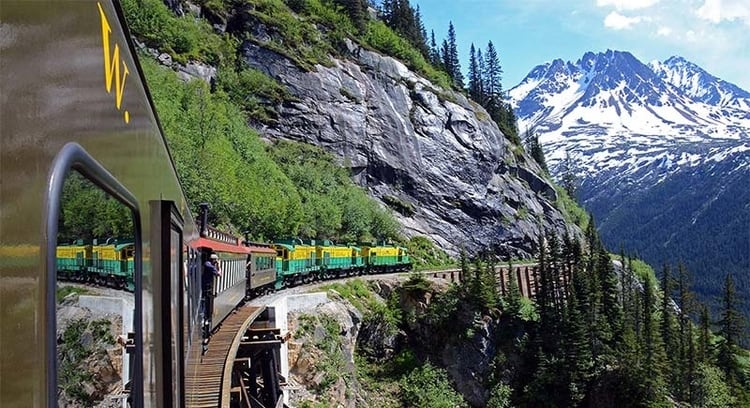 7. Aso Minami Route, Japan
The Minamiaso railway line lies in Japan. It looks to be one of the most feared and dangerous rails in the world. Part of the rail line passes through the high iron bridge which seems fragile. The bridge is rather narrow and unfenced and one wrong move of the train driver is enough for the train to break downwards. Though the railway bridge isn’t the only danger here. The train track of the Aso Minami route lies close to live volcanoes along with Mount Aso, Japan’s biggest active volcano. Nobody knows about the next eruption, that’s why there is no guarantee that a train with passengers will not arrive at the foot of the volcano.

The landscapes seen from the window are fantastic though. Green hills covered with a dense group of bushes and trees along with ravines and rapid rivers makes it all the more exciting to have it in your bucket list! 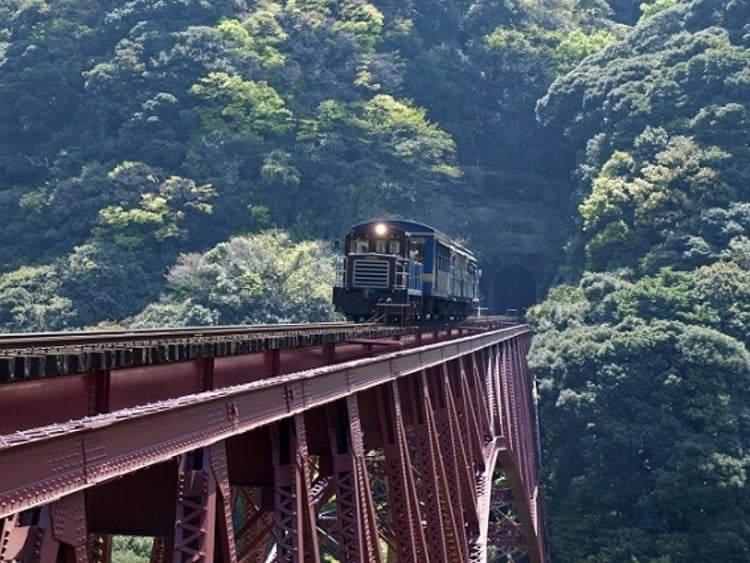