Imagine you’re on the top of a mountain at 11,742 ft above sea level and you look over the world sprawling below, colors and shapes blending into a beautiful mosaic. Isn’t it amazing!!

It's a spectacular landscape: Green depths of forests, dusty brown spread of massive rock cliffs, lush green valleys, majestic ranges of silvered peaks and yellowish grasslands all along the banks of the Mandakini river that flows green, deep, pure and silent. About 100 m southeast from the river lies a significant pilgrim centre dedicated to the Lord Shiva: The Kedarnath temple. Nestled in the lap of Himalayas, Kedarnath is the highest Shiva shrine among the 12 Jyotirlingas of India. Perched at an altitude of 11,742 ft above sea level, Kedarnath is in Rudraprayag district of Uttarakhand. Bordered by the snow-clad peaks of Himalayas all around, Kedarnath offers a unique experience to the travel fanatics.

There is this upcoming movie “Kedarnath” directed by Abhishek Kapoor that we hope will give clear connotation of this divine place. Being the director’s fan, trailer seemed aesthetically pleasing and pure treat to me, the cinematography, VFX and the story everything was visually stunning. Each frame is sure to keep you hooked throughout. Set with the backdrop of the floods that wrecked down Kedarnath town 5 years back, the movie seems promising. After much speculation and research, I came to know a lot about this place and about the floods that engulfed the area few years back. Read below to know more: 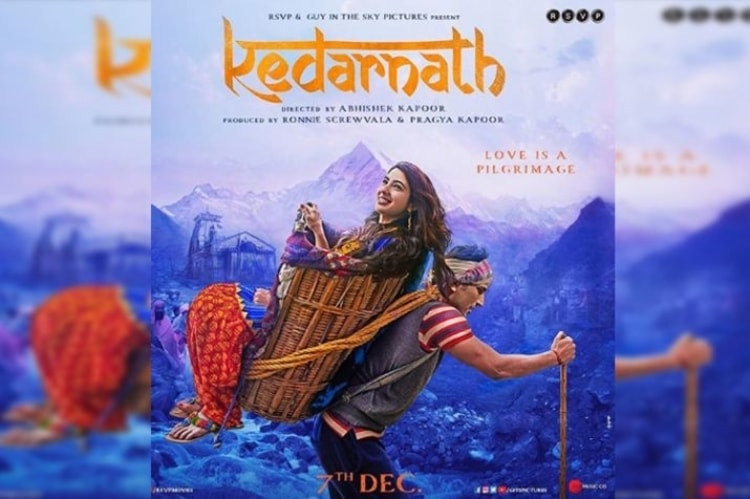 Kedarnath stands on the head of the sacred river Mandakini and appears as a perfect portrayal of the descending of the Ganga from the heavens in the matted locks of Lord Shiva. According to Hindu mythologies, the temple of Kedarnath was built by the Pandavas. It is said that after the completion of the great war of Kurukshetra, the Pandavas felt guilty for killing of their own relatives and sought blessings of Lord Shiva for redemption and absolve themselves of this sin. Shiva tried to make them feel guilty and kept fleeing away from them. In this process, Shiva transformed himself into the form of a bull and took refuge in Kedarnath. But Bhima recognized him and caught the bull by its tail. Lord Shiva then decided to give them his blessings and then instructed them to worship the hump of the bull. Other parts of Lord Shiva’s body appeared in other mountains, and the Pandavas also built temples there. They are known as Panch Kedars: Kedarnath(Hump), Tungnath(Arm), Rudranath(Face), Kalpeshwar(Face), Madhymaheshwar(Navel). Inside the temple, there is an irregular, three-faced linga, representing the hump of Lord Shiva when he took the form of a bull. The present temple was reconstructed by Adi Shankaracharya in the 8th century. The exact date of the temple's construction is not mentioned in ancient literature. But if we look at scientific evidence, a minimum age of about 3,000 years can be considered. 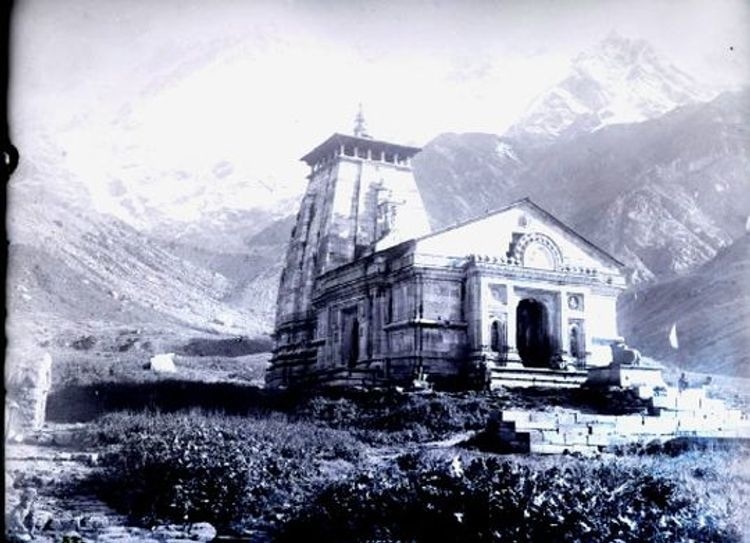 Even after the Himalayan Tsunami of June 2013, the Kedarnath Temple did not lose its beauty. Built between 9th and 11th century, it has retained its indelible unity with the Spartan Kedar mountain in the distance. Scientist even claim that Kedarnath temple was under snow for more than 400 years and say that most of the people are unaware of this fact!! 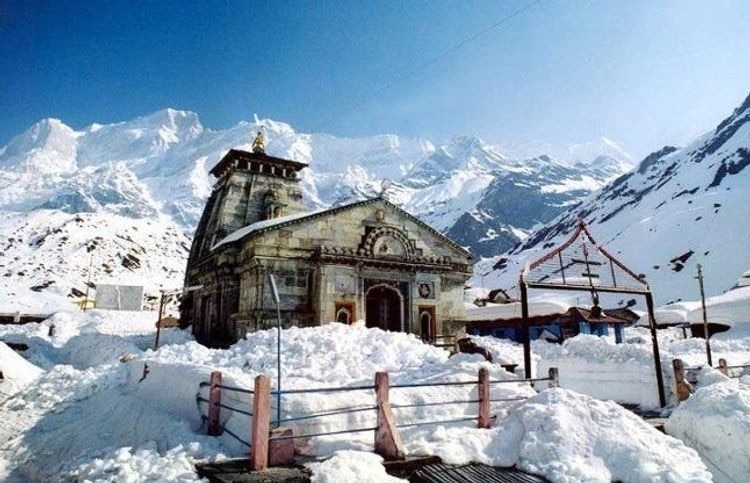 According to the scientists of Wadia Institute of Himalayan Geology, Kedarnath temple survived being buried under the snow for almost 400 years and so they are not surprised that the shrine did not suffer much damage during the massive floods on June 16-17 (2013) in the region. They point out that the period between 1300 - 1900 AD is known as Little Ice Age when a large portion of the earth was covered by the snow. It is believed that during the period Kedarnath temple and the town was covered by snow and became a part of glaciers.

The architects not only kept in mind the terrain but also the formation of snow and glaciers and ensured that the structure was strong enough to withstand natural disasters and the passage of time. The entire area of the Kedarnath is a part of the Chorabari glacier and is surrounded by mountain from three sides. Also, Mandakini rules the Kedarnath and there is heavy snow in winters and excess rainfall during the rainy season. So, the entire temple complex and the area was built in such a way that the shrine would be able to survive the eccentricities of the nature. What it faced recently is clearly nothing compared to what it has been through for the 400 years it was icebound. 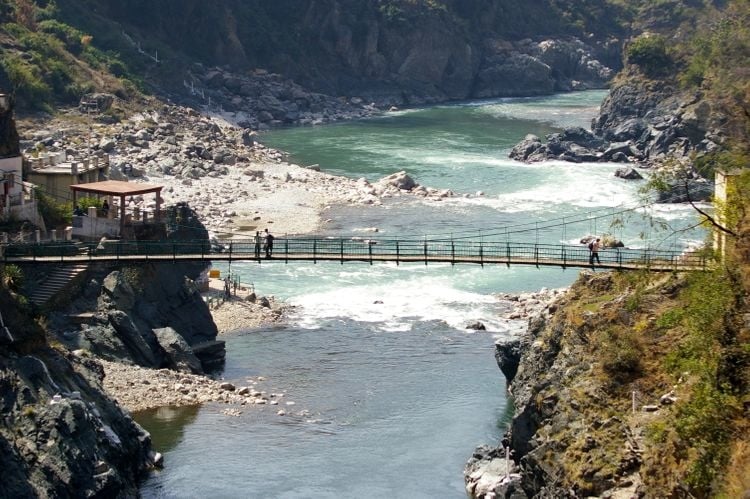 The Rampage of Mandakini:

“I felt as if the sky had been torn asunder. Within seconds, a massive wall of water gushed towards Kedarnath Temple. Huge boulders flung into the sky like an explosion. In less than 15 minutes, thousands of people were swept away.”The above statement was given by one of the survivors of the Himalayan Tsunami who was on the chardham yatra and witnessed the harrowing wrath of nature on June 16, 2013. According to the survivors, enormous amount of water came down the mountains and long stretches of a road and houses just swept away. The amount of destruction caused by this incident is unimaginable. 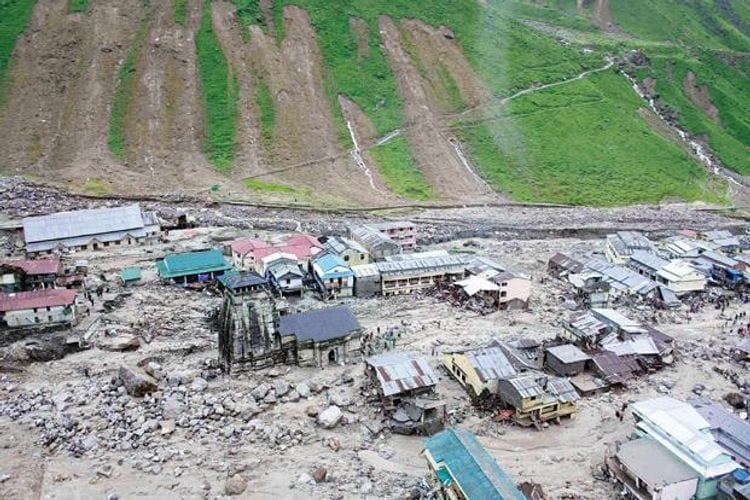 The flood of 2013, which wreaked havoc and killed thousands of people, was an outcome of the rage of the Mandakini. This river that nourishes thousands swept away almost everything in its path in June 2013. The mountains came crashing down and there were landslides all over the valley. Most of the infrastructure including shops, hotels and rest houses had been swept away. According to one of the eyewitness, the raging Mandakini brought so much mud, silt and heavy stones with it that at many places the riverbed rose as high as 15 metres! Men, women, children, vehicles - all were buried under the tremendous amount of debris brought down by the river. The place saw one of the biggest natural disasters.

It all started at Chorabari glacier. The glacier lies on the slope of the Kedarnath peak of the Himalaya which gave way to the incessant rains that brought down a river of debris, death and destruction. It has two snouts—one is the source of the Mandakini and the other becomes the Chorabari Lake. People recall that on June 16 the lake exploded when clouds burst over it. Also, between 14 and 17 June, Uttarakhand state received 375 percent more rainfall than the benchmark level during a normal monsoon season. 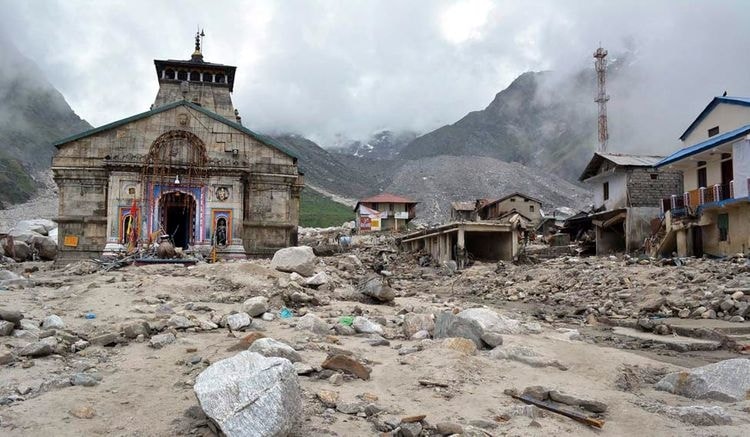 Deaths and Damages by the tragedy: 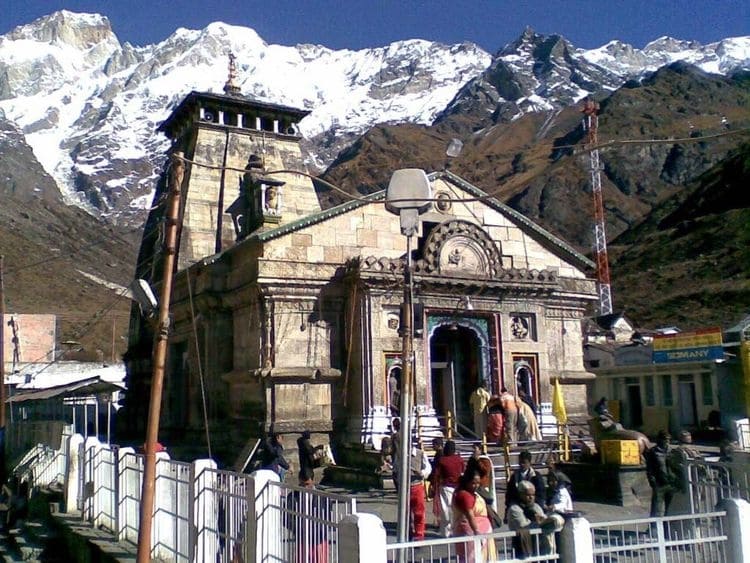 From the people who survived the massacre in the Kedarnath valley, here are some horrific tales: 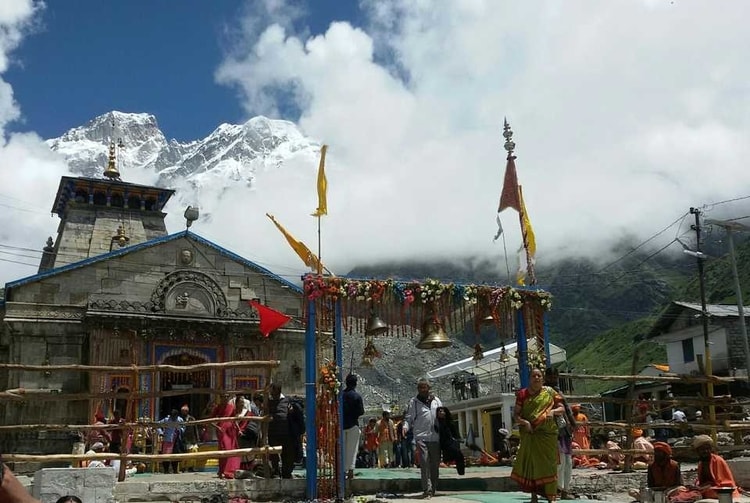 A few months after this terrible disaster, the rebuilding of Kedarnath began. After a thorough analysis of damage to a variety of social and economic sectors by the investigating agency efficient recovery and reconstruction efforts began. The Archaeological Survey of India (ASI) took the initiative to restore the beauty of the temple complex. Nobody had ever imagined that the Kedarnath Yatra would resume the very next year after the calamity. But it happened since this Himalayan area is entirely dependent on tourism, particularly religious tourism, for its livelihood. So, it was essential for the government to restart this yatra as soon as possible.

But who would take on this massive task to rebuild Kedarnath - located at almost 12,000 feet, where temperatures often dropped well below zero degree? No government agency had the skills or expertise to handle this task in such a treacherous terrain. The government finally turned to the Nehru Institute of Mountaineering (NIM), a prestigious Himalayan institute based in Uttarkashi, to rebuild Kedarnath. The task was handed over to NIM officially on 11 March 2014. 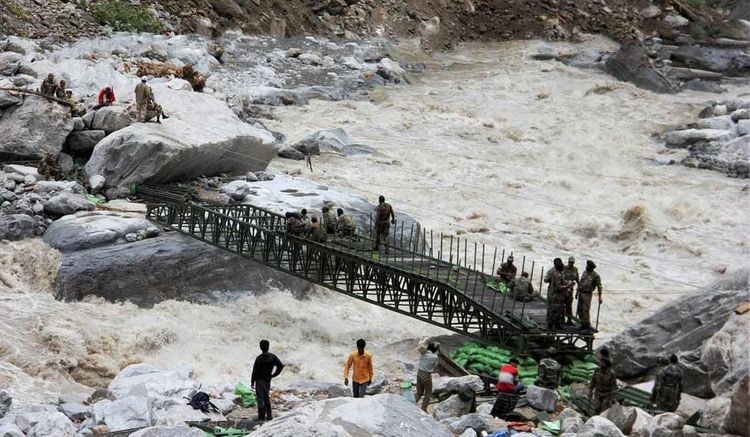 The conditions were so harsh, that the bigger and mightier machines were required to quicken the pace of work. Ordinary helicopters simply couldn't have done the job. A beast of a chopper was required, which only the Indian Air Force could provide. So, finally history was created on 6 January 2015 when the biggest transport helicopter of the Indian Air Force, Mi-26, landed on a specially built helipad in Kedarnath. It was perhaps for the first time in the history of the Indian forces that a Mi-26 helicopter landed at such a height. 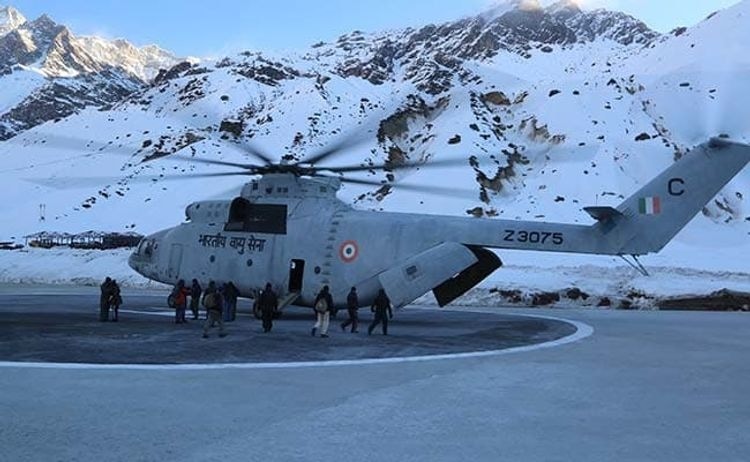 A Matter of Concern:

Despite the remarkable efforts done for the restoration, some serious concerns about the structures erected now cannot be ignored. Particularly the construction of huge, embankment structures such as Ghats, protection walls, etc., may cause some serious problems in future. The carrying capacity of this fragile terrain isn’t for the big structures. After the disaster, the newly deposited moraine debris is still unconsolidated and any heavy construction work on this loose sedimentary deposit may have tragic results, much like what happened in 2013.

Sunita Narain of the Centre for Science and Environment labelled the Uttarakhand tragedy as a “man-made disaster”. While there could not be a blanket ban on development activities in these fragile areas given the needs of local people, “we need to look at ways of development without destroying natural resources,” she said.

Rampant mining on the riverbanks and indiscriminate construction of hydropower projects forewarn disaster in Uttarakhand. Construction of dams requires huge forest area too which in-turn pose serious threat to the biodiversity. Ever since Uttarakhand was created in 2000, the state government, be it of the Congress or the BJP, have worked on just one agenda-exploit natural resources of water, forests and minerals to develop infrastructure, without caring for its consequences on nature. 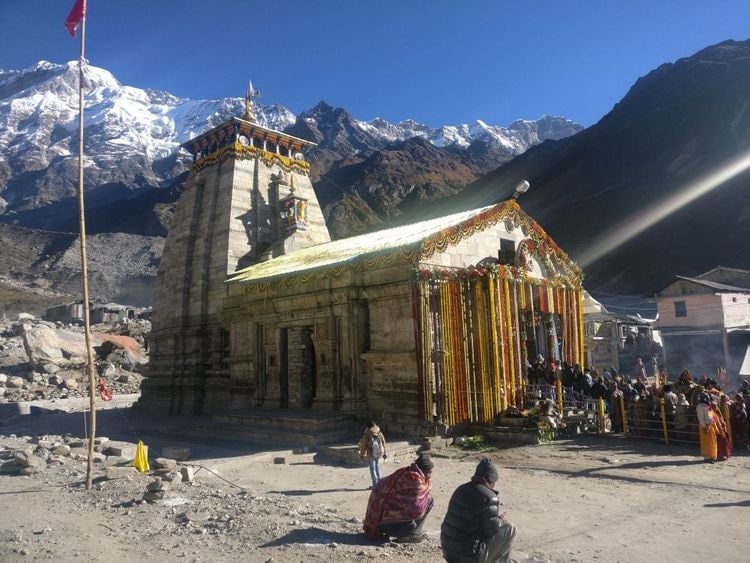 We seriously need to be concerned and be more cautious about our actions and responsibilities towards the mother nature and the existence of mankind!! Extreme developments on this ecologically fragile place is one of the biggest reasons for the disasters. The prime need is to make sustainable use of the natural resources maintaining the balance with the ecology.

How to reach Kedarnath?

By Air: It does not have an airport of its own, do the nearest airport is Jolly Grant Airport in Dehradun located some 240 KMS away.

By Train: There are numerous trains to reach Haridwar from different parts of India. There is no railway station at Kedarnath. Rishikesh is nearest railway station to Kedarnath which is some 105 KMS away. From Rishikesh, one can take bus to Gaurikund. Hiring a cab from Rishikesh is best option to reach Kedarnath if you want to travel at leisure and conveniently. Click here to check New Delhi to Haridwar trains.