The IVC site is located near present-day Dholavira village in Kutch district. It was discovered in 1968 by archaeologist Jagat Pati Joshi. The site’s excavation between 1990 and 2005 under the supervision of archaeologist Ravindra Singh Bisht uncovered the ancient city, which was a commercial and manufacturing hub for about 1,500 years before its decline and eventual ruin in 1500 BCE.

After Mohen-jo-Daro, Ganweriwala, and Harappa in Pakistan and Rakhigarhi in Haryana, Dholavira is the 5th largest metropolis of IVC. The site has a fortified citadel, a middle town, and a lower town with walls made of sandstone or limestone instead of mud bricks in many other Harappan sites. 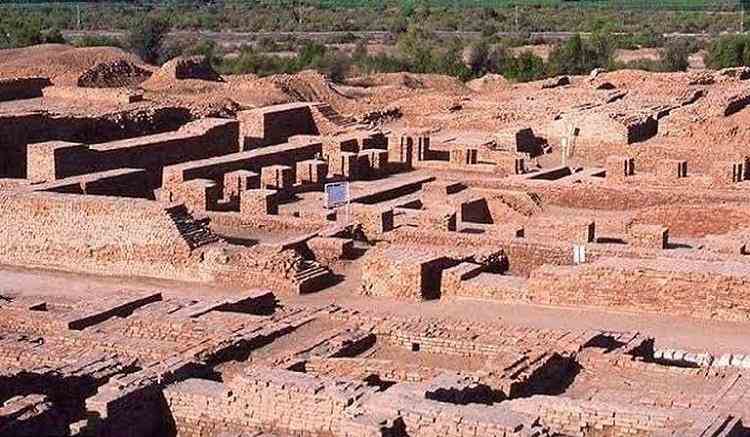 Archaeologist Bisht cites a cascading series of water reservoirs, outer fortification, 2 multi-purpose grounds, one of which was used for festivities and as a marketplace, 9 gates with unique designs, and funerary architecture featuring tumulus, hemispherical structures like the Buddhist Stupa. Unlike graves at other IVC sites, no mortal remains of humans have been discovered at Dholavira. Memorials that contain no bones or ashes but offerings of precious stones add a new dimension to the personality of the Harappans.

Rise And Fall Of Dholavira

Remains of a copper smelter indicate Harappans, who lived in Dholavira, knew metallurgy. It is believed that traders of Dholavira used to source copper ore from present-day Rajasthan and Oman and UAE and export finished products. The site was also a hub of manufacturing jewellery made of shells and semi-precious stones, like agate, and used to export timber.

Bisht says that beads peculiar to the Harappan workmanship have been found in the graves of Mesopotamia, indicating Dholavira used to trade with the Mesopotamians. Its decline also coincided with the collapse of Mesopotamia, indicating the integration of economies. Harappans, who were maritime people, lost a huge market, affecting the local mining, manufacturing, marketing and export businesses once Mesopotamia fell. He further says that from 2000 BC, Dholavira entered a phase of severe aridity due to climate change and rivers like Saraswati drying up. Because of a drought-like situation, people started migrating toward the Ganges valley or towards south Gujarat and further beyond in Maharashtra. 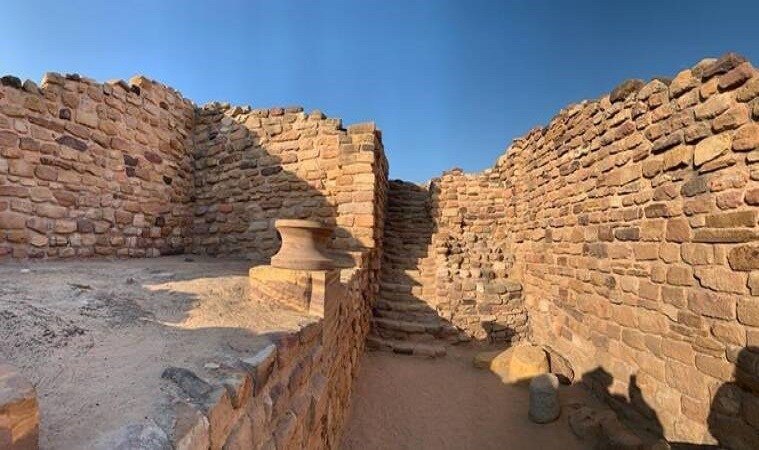 In those times, Bisht says, the Great Rann of Kutch, which surrounds the Khadir island on which Dholavira is located, used to be navigable, but the sea receded gradually and the Rann became a mudflat.

Bisht says the UNESCO listing became possible because the site was found free from any kind of encroachment, a rarity in India. In its release, UNESCO termed Dholavira as one of the most remarkable and well-preserved urban settlements in South Asia dating from the 3rd to mid-2nd millennium BCE. Since the excavation at the site, the ASI has developed a museum here. Dholavira, a village with a population of around 2,000, is the nearest human settlement at present. Near the ancient city is a fossil park where wood fossils are preserved.

Stay tuned to the Trainman Blog to know all the latest updates on Railways, Tour & Travel, and Covid-19. For your one-stop solution, book your train and flight tickets through the Trainman app. Download the Trainman app and check PNR Status of the booked ticket, Seat Availability, Running Status and many such exciting features.