The current situation in the country seems to be so chaotic when there is flood, riots, accidents all happening at the same time but thankfully in different parts of the country. Three train accidents that took place recently one after the other within a time span of 10 days left many passengers stranded and devastated. While there were multiple reports and speculations for the reasons behind these accidents, the people affected by it and the death toll have only risen. It was a nightmare when the third rail accident happened with Nagpur-Mumbai Duronto Express-12290 derailment on August 29, 2017 but thankfully no casualty was reported in this one compared to the other two Utkal Express-18478 and Kafiyat Express-12225 derailments which took away number of lives and left many injured.

1. AL Ayyat (Egypt) Train Accident: Feb 20, 2002
This is one of the deadliest train accidents that took more than 370 lives after an explosion of a small stove cylinder when the train was running into high speed. Horrible fire burst opened the door and came passengers running and screaming as they got grilled in the fire. By the time train engineers realized it, fire had already erupted into seven cars of the train. It was already 2 hours since the initial fire broke after which the train came to a halt. Engineers then uncoupled the burning cars from the remaining unaffected cars. It is said that each car was carrying passengers double the capacity of 150 and hence the death toll of 370 was highly an underestimate. Some of the bodies burnt so badly that it turned into ashes and due to overload there were no records of the passengers travelling.

2. Awash Ethiopia- January 14, 1985
This rail accident happened when a 5-car passenger train carrying about 1000 people derailed as it crossed a bridge outside the town of Awash. The train was running in high speed while crossing a curve. At turns, engineers are supposed to slow down the speed which this train’s engineer did not do due to which train got derailed and plumbed down to a ravine. It took around 450 lives and left 400 injured. The Engineer was arrested later.

3. Torre Del Bierzo-Spain- January 03, 1944
This occurred when three trains collided resulting into fire. On January 03, 1944 three trains- Galicia Mail Exp, an engine train with 3 cars and a fully loaded coal train collided inside a tunnel. The Galicia Mail Exp suffered from a brake failure and ran into a shunting engine which caught fire and destroyed the signaling system. The coal train with 27 loaded wagons coming from opposite direction hit the shunting engine causing many fatalities and leading to a fire burning for 2 days. The exact figures of the number of passengers travelling is unknown as many people were travelling without tickets and fire caught up everything of the human remains. 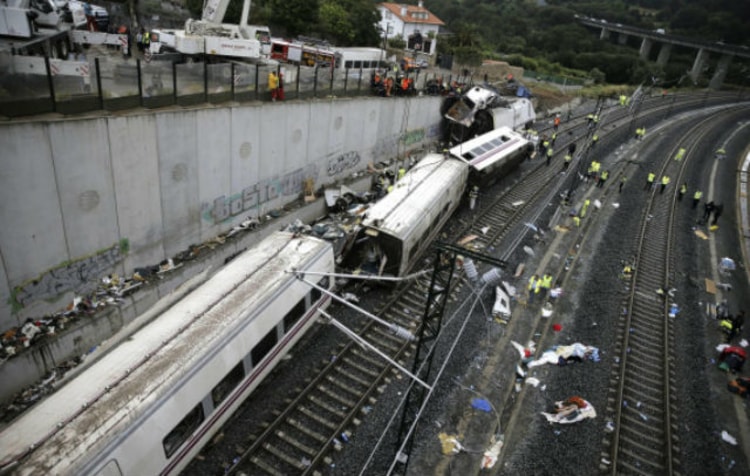 4. Ufa Train disaster- Russia- June 04, 1989
This train disaster happened in June 1989 near the city of Ufa in Soviet Union is considered one of the deadliest train accident in the history of Russian and Soviet Union. It occurred when a liquified natural gas pipeline exploded near the railway tracks just when two passenger trains were passing in opposite direction. The reasons for pipeline explosions is said to be a leakage in the pipeline that accumulated the gas in the gully through which train passed about half a mile away. There were hundreds of children and families travelling ahead of their vacation time in the passenger trains when a spark set off the explosion and killed around 600 out of the 1200 passengers travelling. 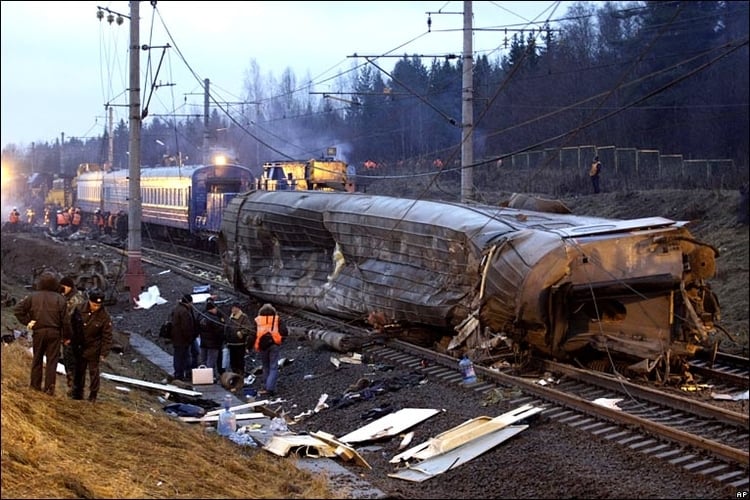 5. Balvano Accident- Italy- March 1944
This is the most unusual train disaster happened in southern part of Italy near Salerno in the midst of World War II. Some believed it was a cargo train and was carrying passengers illegally. The disaster was due to the spilling of Carbon Monoxide gas from the locomotives, the fumes of which overtook the cars just when the train was crossing a tunnel. Passengers started suffocating due to the Carbon Monoxide gas which suffocated the crew and the passengers in the front cars. Only last few cars that were still to enter the tunnel and were in open air survived as the passengers jumped off quickly. But by that time, the fumes had already taken lives of around 430 passengers. The reasons behind Carbon Monoxide gas is said to be the low quality of coal that was used in locomotives those days due to the world war going on between the nations. Due to the world war the authorities were busy trying to free the nation and they did not have resources to handle the situation properly. Bodies were buried in a mass grave outside Balvano and families of victims were compensated as if it were war casualties. No official death toll was ever declared and details of the incident were swept up in the war and have been lost. 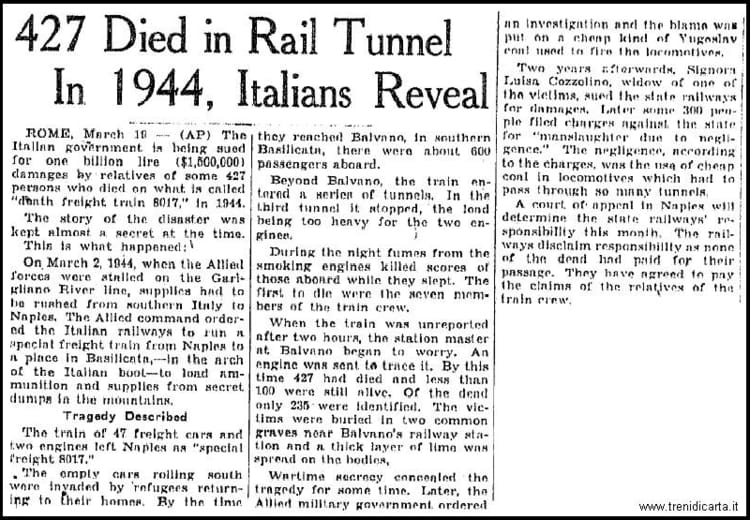 6. Guadalajara Train Disaster-Mexico- January 22, 1915
This is the oldest train disaster to appear in our list. During the Mexican Revolution started from the year 1910, there were many power shifts from the hands of one member to other. With the ongoing conflicts between the then President Venustiano Carranza and Pancho Villa, Guadalajara was captured by Carranza. After this troops were asked to bring their families to Guadalajara and a special train of 20 cars were arranged which was grossly overloaded with troops and their families. It was then that the train’s engineer lost control on brakes and train gathered speed. With steep turns and speeding train, it eventually overturned and plunged into a valley. This led to killing over 600 people from the 900 people onboard.

7. Ciurea Rail Accident- Romania- 1917
Occurred during World War I, but with no proper investigation, the exact reason for the accident has never been known and the total death toll also remains uncertain. Speculators say the accident occurred due to the brakes failure which caused derailment of cars which eventually caught fire after being switched onto a loop to avoid collision with another train stationed at some miles apart. It took lives of nearly 800-1000 people making it one of the worst train disasters in the history. Among the passengers were wounded soldiers and refugees who were fleeing a German advance.

8. Bihar Train Disaster: June 06, 1981
This is the worst train accident in Indian Railway’s history that killed nearly 650 people. The passenger train was crossing a bridge when the train got derailed and plunged into Baghmati River in the state of Bihar. The train was moving from Mansi to Saharsa when seven of the nine cars of the train fell into the river. The exact reason for the derailment is unknown although some say that the engineer tried to apply brakes too hard to avoid hitting a cow that had walked into the tracks somehow. There were heavy rains in the region which might have caused a slip on the track causing the train to plunge into river. Since the heavy rainfall had already swollen the river, the bogies that went straight into water, left many bodies to have washed away by the river currents, the bodies of which were never recovered. 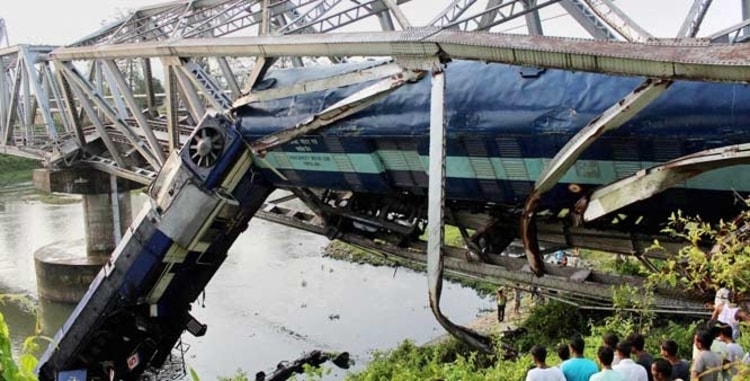 9. Saint-Michel-de-Maurienne derailment- December 12, 1917
It is one of the greatest rail disaster in French history to date killing over 700 people. A french troop train carrying roughly 1000 troop members derailed in 1917 leading to the deaths of over 700 soldiers who were heading to their homes on leave during World War I. The derailment caused fire and took away lives of so many soldiers. Train derailed as it descended through the Maurienne valley rail line and caused a catastrophic crash and subsequent fire. Those days, there were shortage of locomotives due to which two trains was coupled through a single engine and attached were 19 coaches which was 3 times beyond the locomotive’s limit. Due to the overload, the brakes failed and the speeding train derailed causing the deaths and misery in large scale.

10. Queen of Sea-Srilanka- December 26, 2004
The Queen of Sea train crash caused when a Tsunami generated from Indian Ocean struck the train and created a worst ever accident in railroad disaster history till the date. It took away lives of some 1700 passengers, that is the largest number of deaths caused in a single accident around the world. It was only 2 hours since the train left its origin Colombo Fort station that a giant earthquake wave cutting through the trees hit the train, and threw it off track as water gushed inside the cars. Just when people could realize what had happened another wave struck the train again causing it to roll 4 times before coming to a rest. As the wave receded, it dragged along many passengers to the sea. The 2004 Tsunami had scattered thousands of lives in Sri Lanka and the Queen of Sea rail disaster remains the most fatal accident that ever took place in the history of railways. 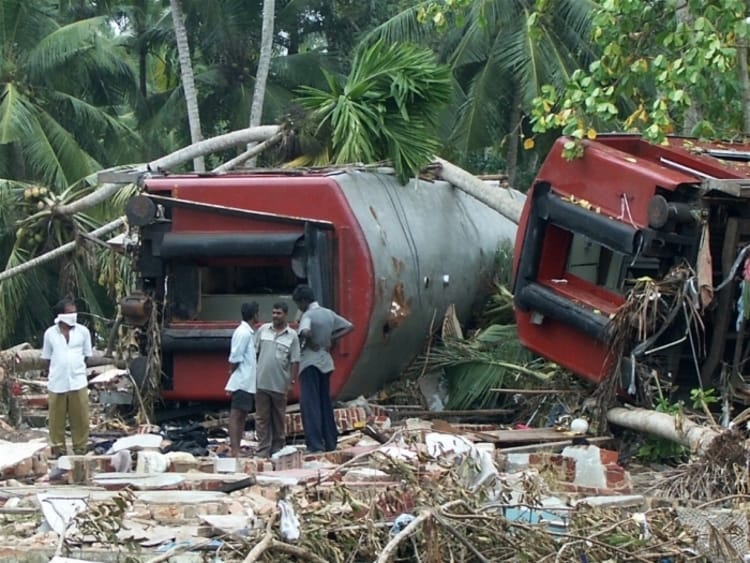