India is a notable hub for the production of two of the most popular and stimulating beverages in the world, namely tea, and coffee. It exports the largest share of tea in the world and is an essential part of tea culture internationally.

While coffee may be regarded as an upstart of sorts on the subcontinent, specialty coffee houses have started to mushroom all across India. This is in no small part due to the excellent quality of coffee produced in the country.

So, let’s take a tour across the land to get acquainted with this fascinating subculture of Indian life. Discover, plantations, and estates across the country and gain fascinating insights into manufacturing processes and the intricacies of the coffee and tea trades.

Covered by canopies of green, these coffee estates stretch for acres bearing coffee beans that are ready for picking. After being dried and roasted they will finally end up as steaming aromatic cups of java.

Such a scenario is not far removed from reality at all and there is no shortage of coffee plantations in India that allow visitors to get a first-hand glimpse of the process. You can even experience that much-craved caffeine rush by indulging in tastings.

Chikmagalur is among the largest contributors to coffee production in India. It is also one of the first places to start coffee plantations with the first ones being inaugurated during British rule. Nowadays it is well-reputed for having some of the best premium Arabica coffee estates. 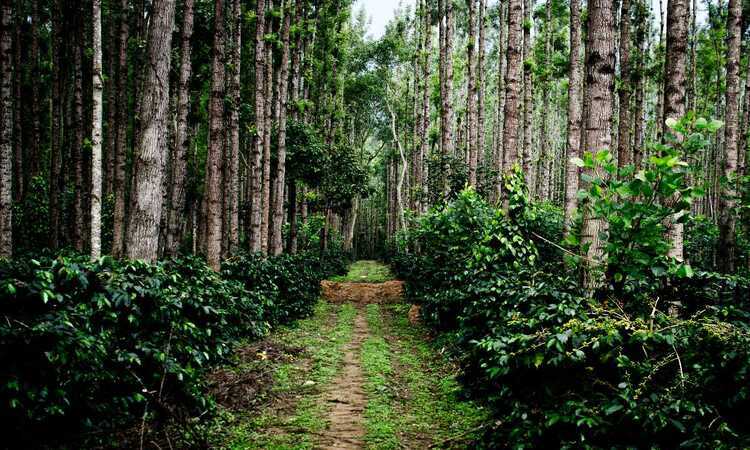 The hill station is situated in the northern portion of the Mullayanagiri foothills range. It comprises the Karantaka part of the Western Ghats.

Some notable Coffee Estates in Chikmagalur are:

Located in the Muthodi Forest known also as the Bhadra Wildlife Sanctuary, around 20 KM from Chikmagalur, Bynekere’s Arabica Coffee beans are traditionally shade-grown.

Bettadakhan Estate is spread over 250 acres of land within the Western Ghats. It has been owned by Badra Estates since 1936.

Located in Angadi Village, it is the cradle of the Hoysala Dynasty that once ruled much of the Deccan Plateau. The estate was first established in the 1800s and has been owned by four generations of the Hoysala family.

This magnificent hill station of Kerala located in the Palakkad District is renowned for its coffee plantations and forest reserves. Visitors will be treated to a spectacular view of the geographical wonder that is the Palakkad Gap of the western ghats. You will also be able to take in the landscapes of the neighbouring state of Tamil Nadu from this vantage point.

Palagapandi Estate is located at the highest point of the Nelliyampathi Hills. Visitors will get to stay in a magnificent colonial bungalow at the centre of the estate that has now been converted into a resort.

Perhaps the greatest selling point of this estate is that it will satisfy both tea and coffee lovers alike since there is also a tea garden on the estate. Cardamom is another product of the Palagaandi Estate.

You can get a spectacular glimpse of the surrounding valley which features a waterfall measuring up to a height of 100 meters. The estate has the honour of being one of two Demeter-certified Biodynamic coffee estates in the world. This means that the coffee produced here is grown using regenerative farming practices that are harmless to the environment.

The state saw plantation begin back in 1945. It spans an area of 2000 acres of which 372 acres are dedicated to the cultivation of both Robusta and Arabica coffee beans.

This scenic hill station which is situated on the Eastern Ghat’s Shervoy Hills around 250 km from Bangalore is often called the Jewel of The South. You will find some of the oldest coffee plantations here, many having been established as early as the 19th century.

Some well-known coffee estates of Yercaud include: 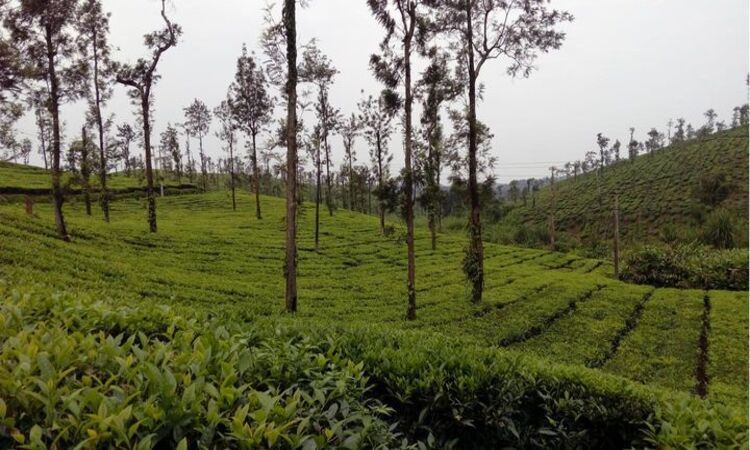 Spread across a 24-acre stretch of land, the estate is situated on the Shevaroy Hills. The Pallaniappan Ramanathan Family have owned the estate since 1979.

The estate derives its name from the natural spring located within its premises. It is well known for drying berries for 25-30 days after having gone through a rigorous fermentation process that takes 72 hours.

Originally established in 1878 by the British, the Kudripanjan Estate is located in the Shevaroy Hills. The Palani Kandasamy Chettiar Family became the owners of the estate in 1975.

Most people in India begin the day with a cup of chai. In Bengal and the northeast, Lal Cha served with biscuits is popular. Gujaratis are fond of masala chai, adding local herbs and ginger. In Rajasthan, the preferred tea preparation is with milk and lots of saffron.

Additionally, you can find several variations of tea such as oolong, black, white, and green teas and more. Whatever the form may be, tea is an indispensable item in most Indian homes. And something avid tea lovers would surely not want to miss out on.

Whether you prefer your tea strong, lightly brewed, or with lots of milk, no one can deny the pleasure one may experience in exploring these avenues. So, let’s have a peek at some of the best spots for tea tourism in India.

While Darjeeling is often called The Queen Of The Hills, it is also The Queen of Tea Gardens. Almost 25% of the tea in India comes from here. The hill station is widely renowned for its fragrant floral-scented tea with large leaves.

Notable tea estates and gardens in Darjeeling include: 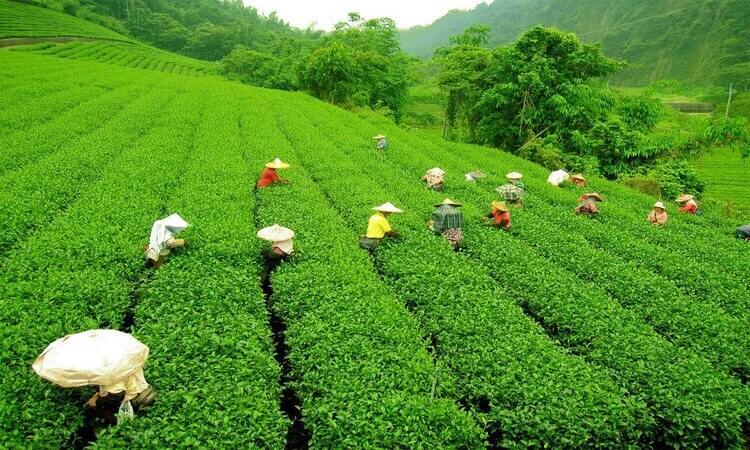 Owned by the Goodrick Group, The Castleton Tea Estate runs along Pankhabari, Hill Cart Road, and Kurseong. It is located on the Kurseong sub-district’s southern side. The estate, which was founded by Dr Charles Graham, is named after a castle still existing in the area. The first name that was considered was Kumseri.

The total area of the estate is 170 hectares and the cultivation ground is spread over 1830 meters. The varieties of tea grown here are classic black, white, and green teas.

The estate was started in 1860 by the Scottish tea company of the same name and was later taken over by the Prakash family in Calcutta. Measuring over 1,600 acres, the estate is situated to the south of the Rangeet River.

Like the Castleton Estate, the Makaibari Tea Estate is located in Kurseong. This estate also boasts the very first tea factory in the world which was established in 1859. Rajah Bannerjee, the estate's 4th generation owner has worked towards holistic sustainable practices that involve the unification of technology and ecology.

Besides being the gateway to Northeast India, Assam is also home to some of the world’s finest tea gardens. Most of the tea proceed here is black tea. It is made from the Camelia Sinensis plant which is usually grown at or very close to sea level.

The tea produced here is rather malty and boasts a very bold flavour. They are usually brighter in colour and are marketed as “breakfast teas”. Smaller-sized leaves from this region are used to make Irish breakfast tea.

Assam currently remains the biggest tea-producing region in the world. The local climate is not very cold and is prone to heat and humidity in the summer months which best compliments the tea business.

Located in Dehajan, Sivasagar, this estate was formed by two English women in the 19th century. Around 50 years ago, it was acquired by the Praksh family based in Calcutta who also manages the Glenburn Group in Darjeeling. The plantation boasts cutting-edge machinery and produces a wide range of teas including CTC black orthodox to green tea.

This tea estate which is located in Barbam, Dibrugarh District, is about 1867.98 acres. Out of this, nearly 1202.82 acres in under plantation. It remains among the largest contemporary single-location tea factories in North-East India. Their annual production is approximately 3 million kgs.

The estate is ISO 22000:2005 certified by SGS, UK and currently manufactures orthodox, CTC, and green teas.

While the climate and environment of Southern India are ideally suited for growing coffee, some of the teas grown here also have an enthusiastic following across the globe.

Here are the best-rated tea gardens in Southern India: 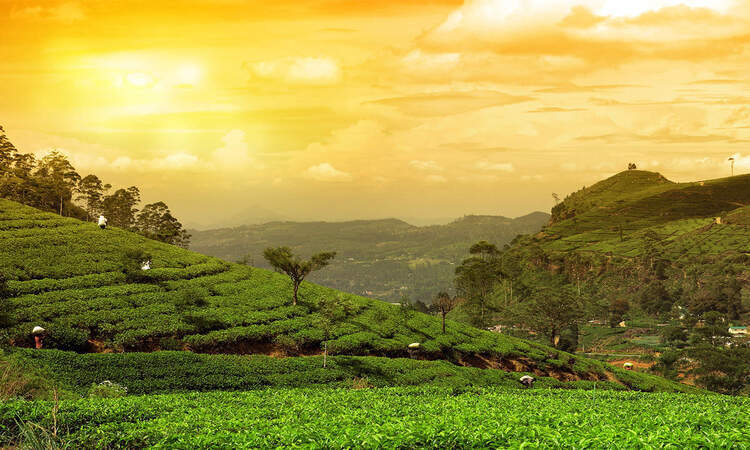 You can find some of the best tea plantations in the quaint little town of Munnar in Kerala. The first tea estates were developed in this area sometime around the late 19th century. The TATA group partnered up with the Finlay Group in the late 1970s, eventually gaining full control of the estate. More recently, in 2005 the TATA Group left the tea plantation business and the Kanna Devan Hill Company Plantation Limited took the reins.

Tucked away in the lush, green mountainous regions of Kerala, Wayanad produces some of the best tea along with coffee. The best part about this tea garden is that it is also a tourist resort, so visitors may look no further for lodging during their trip here. It is located in the Priyadarshini tea estate and is run by a tribal cooperative.

Renowned for its distinct fragrance, Nilgiri tea is characterized by strong, dark-shaded leaves. Tourists can visit the estate which is spread out over a vast stretch of land across Kerala, Tamil Nadu, and Karnataka in Coonoor.

More than half of the tea produced here is exported to foreign countries and is also used in tea bags. Anyone planning a visit to Coonoor or the neighbouring Ooty should be sure to try out the fragrant blend of tea with other local ingredients while taking a stroll across this picturesque tea estate.

Cuppa For All Pallettes

The charming appeal of the refreshing and aromatic coffee and tea gardens of India is an attraction for tourists from across the globe. Presenting charming and delightful sights, these gardens are among the most inviting attractions to be found anywhere.

Visitors to these gardens will have the opportunity to sample the best selections of their preferred cuppas while taking leisurely strolls or even just lazing around. Moreover, the captivating views of surrounding hills and forests put you right in the lap of nature.

And as they say, timing is of the essence, and this is certainly true of tea and coffee. Arriving at the gardens at the height of the plucking and processing season allows you the freshest samples of the best brews. So, let’s pick up our cups, have a toast and lose ourselves in the aromatic tea and coffee gardens of India.