When we think of the desert, we imagine vast expanse of dunes, sunny days and camel safari with literally no vegetation. Try and imagine all of this with the mix of snow. This situation can be hard to imagine, right? Well, that recently happened in the Sahara Desert. While January brings snow and cold to many parts of the world a hot desert receiving snow is pretty unheard of. As bizarre as it might seem, it has actually happened.

Every season brings its surprises and this time it happened at the hottest place on Earth. For only the third time in 40 years, people witnessed snowfall in the Sahara Desert. A freakish winter phenomenon that turned the arid desert mounds of Algeria into a delightful mixture of white and brown. Is this yet another worrying indicator of climate change or a rare modern-day miracle? 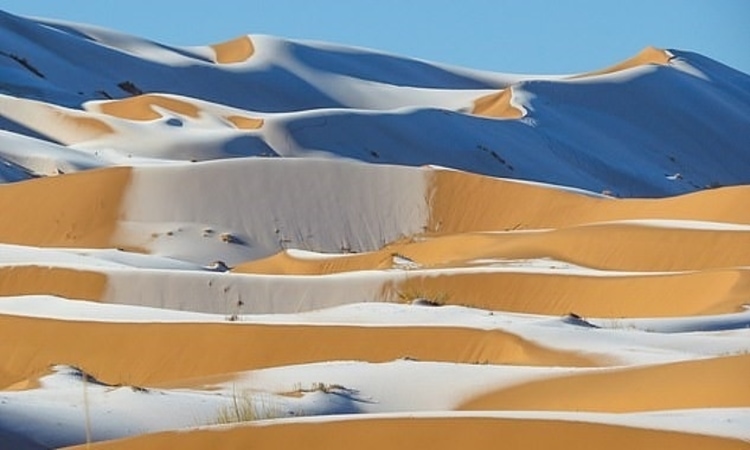 Yes! You heard it right. The world looked in awe and amazement as Ain Sefra- a tiny town in Algeria experienced 40 cm snowfall a few days ago resulting in the temperature to dip at -2 degree celsius. With Europe facing a harsh and cold winter, the cold southern winds blew into Africa bringing some moisture, drop in temperature and snowfall.

Places where snowfall is seen in desert
People in Northwest Algeria (a small town by the name of Ain Sefra) witnessed a modern-day miracle for the first time since 1979 the Sahara Desert experienced snowfall. 15 inches of snowfall has been seen on the brown and arid sand dunes which was one of the most pleasing sites for locals and tourists visiting the country. Although the town is in the Atlas Mountain range that spreads over from Morocco into Algeria, the area is still pretty arid for any other day of the year. 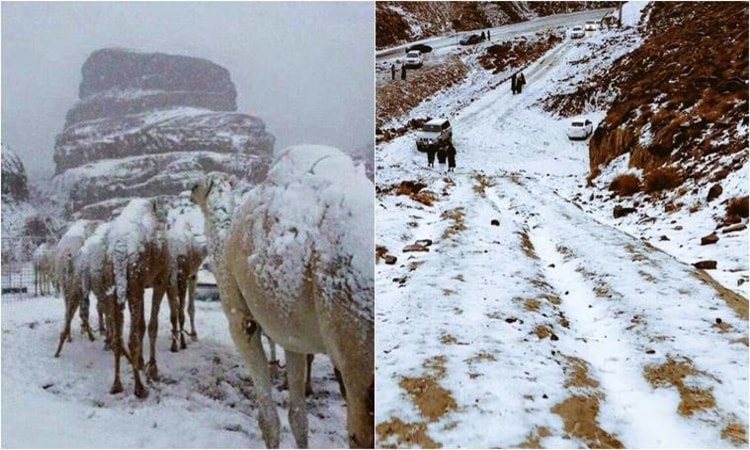 On the other hand, some areas of Saudi Arabia also received light snow which came as a sweet surprise to the locals. It is said that for the first time in 50 years that the minimum temperature fell so low and this phenomenon has occurred only thrice in the last four decades. It was in 2017 when it was seen for the last time.

How did it happen?
For the first time since 1979, cold winds from Southern Spain helped create such conditions that led to snowfall in the Sahara desert. Upon hearing the news, tourists in the vicinity rushed towards the choco-white dunes for a chance at clicking some once-in-lifetime pictures on their phones and camera. In spite of the town experiencing record lows of under zero degrees throughout the winter season this snowstorm was an unexpected miracle that the citizens of this town will remember for ages. 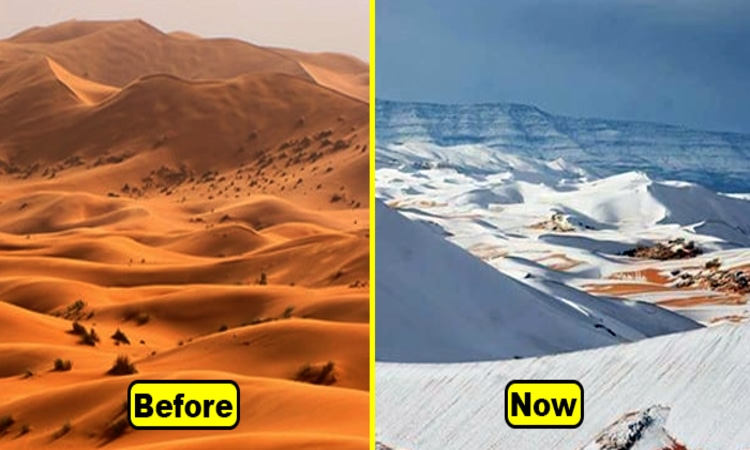 People have enjoyed this unusual diversion from their average highs of up to 50-degree celsius during the hot season and arid weather in the desert kingdom. Many have also flocked to the nearby desert to catch a glimpse of the snow that had fallen.

Unreal snow scenes in the desert
One of the photographers Karim Bouchetata captured incredible images of ice and sand dunes which seems to be unrealistic. Sheep were seen standing on the ice-covered dunes as temperatures dipped to -3 degree celsius. Apart from this the photographer had captured dreamlike shots of camels in snow in the Tabuk region in northwestern Saudi Arabia. Tabuk which shares a border with Jordan experienced unusual weather this month. The uncommon scenes of the desert are surreal. 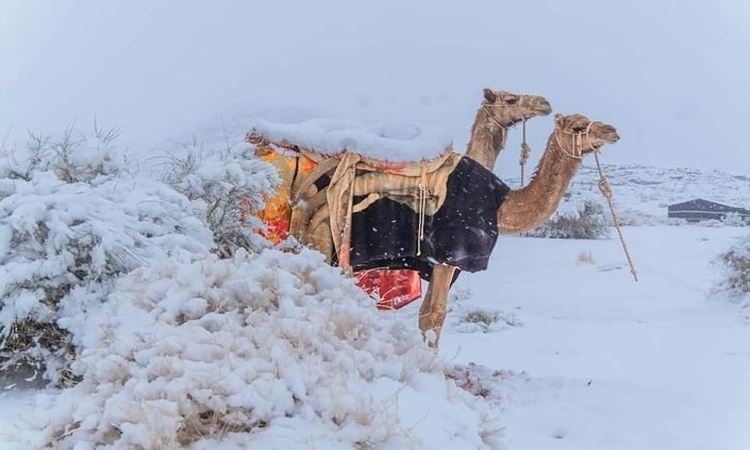 Aïn Séfra - known as “The Gateway to the Desert” - is around 1,000 metres above sea level and surrounded by the Atlas Mountains. The Sahara Desert covers most of Northern Africa and it has gone through shifts in temperature and moisture over the past few hundred years. While it is a known fact that temperatures in deserts can drop dramatically overnight that usually doesn't bring with it any ice or snow at least partially because of the low levels of moisture.

Climate change hits Africa
Extreme weather made its way to Africa and the Middle East and the temperatures have dropped below freezing point. Some parts of the Sahara desert are receiving snow. As the mercury hit 28 degrees Fahrenheit, the snow has blanketed parts of Saudi Arabia and the Middle East. 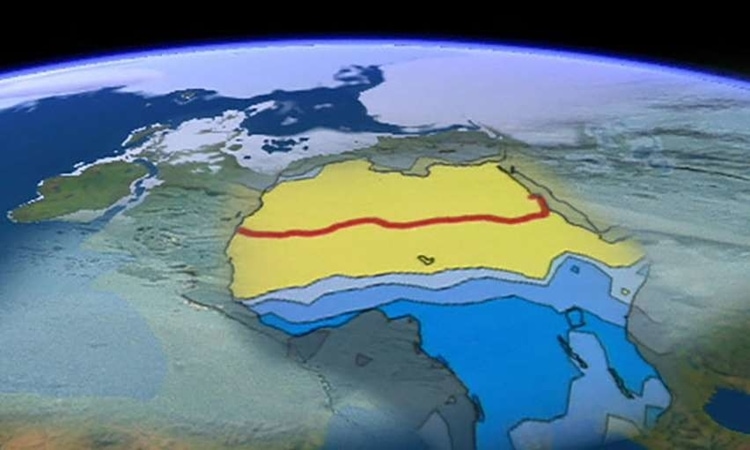 While in the recent past, many influential international forces have been in denial of climate change - could this snowstorm be considered as yet another fragment of the inevitable evidence of climate change? Could this incident be a part of the recent global chain of events that led to horrible natural calamities like Hurricane Irma, California Wildfires or the fatal flooding in Sierra Leone?

Do you think all this has happened due to climate change? Let us know in the comments below. That’s all for today! Keep reading the Trainman blog to know the latest updates on railways and COVID-19 virus. Plan a vacation with your friends or family and book your train as well as flight tickets through Trainman app. Download Trainman App to check PNR Status of the booked ticket, Seat Availability in special trains, Running Status and many such features.