Have you ever thought about trains being run on batteries? The world has gone all battery in this smart era, most of the electronic products run on batteries and now even the rail industry is looking for a shift towards the smarter side. Well, this might sound a bit strange but yes there are a few battery-powered trains in the world that have been developed and are already undergoing trials. Along with other transport industries, rail industry is also looking into the future in a firm manner. The way in which trains are fuelled could get changed radically in the future, which will potentially make trains smoother, quieter more efficient and increasingly environmentally friendly. Also progress in lithium-ion batteries has enabled some firms to think about making trains battery-electric instead of the conventional ones.

In this blog, we’ll be having a look at the current development of battery-powered trains in different parts of the world and how they will be a good alternative to diesel trains or electric trains. 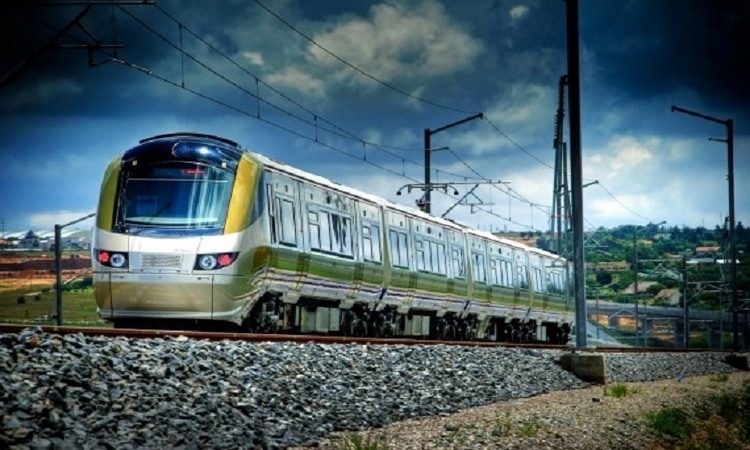 Bombardier
Bombardier, a Canadian firm recently presented Talent 3, which is the first battery-powered train in Europe. Bombardier Transportation is one of the world's largest companies in the rail vehicle and equipment manufacturing and servicing industry. Recently, an electro-hybrid train called the Bombardier Talent 3 started its trial in southwest Germany. The Bombardier Talent 3 is the first of its kind to enter passenger operation. It does not generate any exhaust and is 90 percent efficient. It is also around 50 percent quieter than modern diesel trains.

The current prototype has a range of 40 km (25 miles) and is equipped with four Bombardier Mitrac traction batteries, but the second one scheduled for next trial will go 100 km (62 miles) on a single charge. The range is not as high as in case of electric cars, although trains can recharge the batteries from an overhead line while operating which will ultimately reduce the use of diesel vehicles on track. In Germany, for example, around 40% of the rail network is not electrified, which means that a battery-electric train could operate partially off-grid and then on the other part. Another advantage is the regenerative braking capability, normally difficult to do when there is no on-board battery and electricity would need to be sent back to the grid. 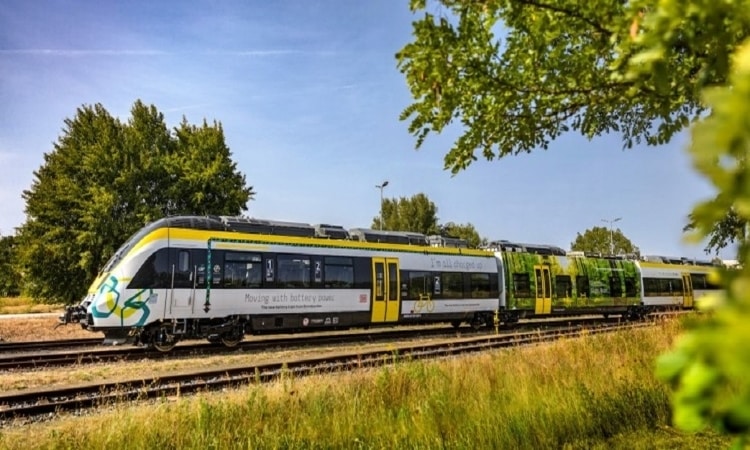 Depending on the intended service pattern, the Talent 3 can be specified with either a 160 kilometres per hour (99 mph) or 200 kilometres per hour (120 mph) top speed. The Technical University of Dresden says that a battery-operated train clearly has an advantage over diesel trains across the service life of 30 years.

The battery-operated train is putting real innovation on tracks. This train is also a response to challenges such as air pollution, climate change and scarcity of resources.

Bombardier also announced that it had signed a $1.9bn contract with the Austrian Federal Railways (OBB) to provide 300 Talent 3 trains for regional and suburban rail, with services expected to begin sometime in 2019.

Vivarail
Vivarail, a British rolling stock manufacturer has also built and launched the UK’s first modern battery train with an impressive range of 60 miles between charges. “We believe that the battery train is the future. The change from a diesel train to a battery train reduces a huge amount of CO2. The battery trains have a range of 60 miles between the charges, which makes them fit for a lot of train connections. Our patented fast-charge system allows us to meet the service requirements of operators”, says Alice Gillman, head of Marketing at Vivarail.

Vivarail is the first company to manufacture battery-electric trains in the UK. Their Class 230 is converted from redundant London Underground D-Stock trains. Vivarail claims that a ten-minute charge gives a range of 50 miles. Power is provided by two lithium-ion batteries per car giving four per train, providing 106kWh, with an expected life of seven years for the batteries. 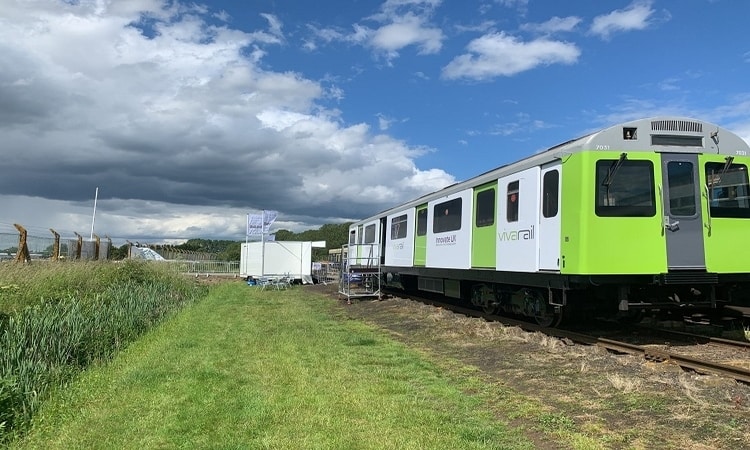 Vivarail ran the Class 230 battery train as a passenger train on the Bo’ness & Kinneil Railway with the support of Transport Scotland and Scotrail in October 2018. That trial demonstrated that the battery train was able to provide a reliable and consistent service and proved that the electronic control systems were fully functional.

Vivarail’s modular train is able to run DMU, EMU, battery or battery hybrid depending upon the power supplies available. Its remote condition monitoring systems both analyze performance and warn if problems occur. The new test train will simulate an EMU with on-board energy storage using lithium batteries and is designed to operate where continuous electrification is undesirable or expensive. These battery-powered trains are capable of running all day with Automatic Charging Points installed at each end of the line. And for the charging, the driver just needs the train to stand at the stop board where a pick-up shoe will automatically engage with a 2-pole supply and charging begins.

Vivarail’s battery train and its fast-charge system also won the Rail Industry Innovation Environment Award. The Class 230 battery train is a market-leading innovation and Vivarail’s patented technology means the company is able to provide the whole package for owners and operators today.

So, Bombardier and Vivarail both are working towards making battery-operated trains prevalent in near future on the rail tracks.

It will be surprising to see such innovations on the Indian rail lines. With the fast-paced developments going all round in the Indian Railways, it looks these types of innovations will also be introduced in the near future which will prevent the resources and act as an alternative to diesel locomotives. 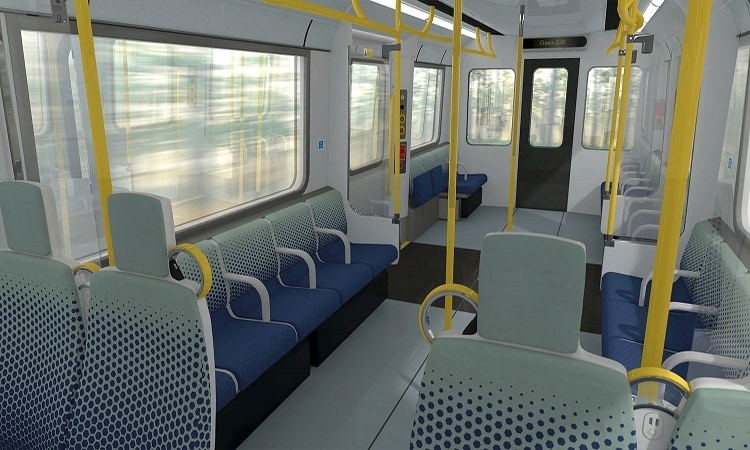 As focus is turned to the green properties of travel and transport, electric trains are increasingly being favored already. Electric trains are cheaper to run than diesel ones and also they produce less pollution. However, electrification of rail lines needs higher cost of infrastructure and initial setup, where electrified tracks are needed to be laid for train operations.

The diesel-powered trains don’t seem to stay longer in the future due to its various limitations. However, there are some points which place the diesel ones a bit higher than electric trains. Their ability to operate even when electricity is down is seen as a large benefit and could mean that the use of diesel in remote and isolated areas may continue well into the future. Safety is also seen to be better with diesel engines; electrified tracks can pose issues when running through residential areas and over crossings and bridges, amongst other places. 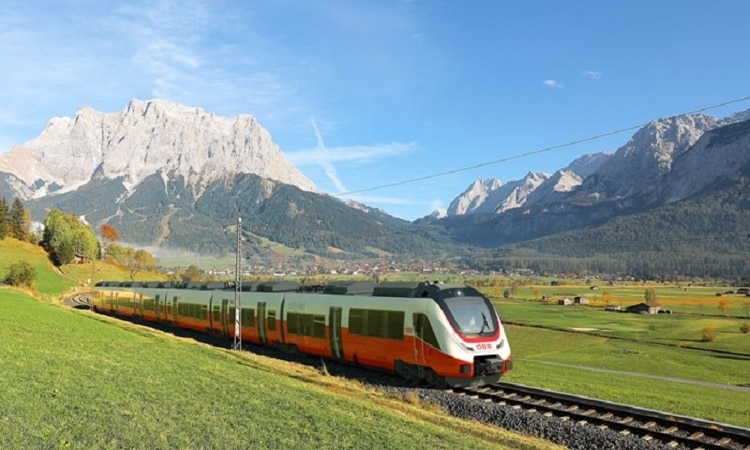 The battery-powered train has a similar major benefit of diesel in that it doesn’t require power lines to be laid for it to operate. Using lithium phosphate and sodium nickel batteries the vehicle operates quietly, which means use in densely populated areas won’t be a problem. The relatively low cost of the batteries, accompanied by the environmentally friendly properties could also see battery-operated trains gaining significant acceleration in the future rail industry. At present issues surrounding battery life exist, something which needs to be significantly improved before their use in long-distance trains becomes possible.

What do you think about the future of battery-powered trains? Let us know in the comments below. For a hassle-free experience book your train tickets through Trainman app. Download Trainman App and check PNR Status of the booked ticket, Train inquiry, Running Status and much more.