Makar Sankranti, also known as Maghi, Uttarayana, or simply Sankranti, is an important Hindu festival. It is held in the first half of January, usually on the 15th. The occasion marks the sun's transition from the zodiac of Dhanu (Sagittarius) to Makara (Capricorn). As the sun is said to move from the southern to the northern hemisphere, the festival is dedicated to Surya, the solar deity.

An interesting fact is that Makar Sankranti is celebrated according to solar cycles. This sets it apart from other Hindu festivals that follow lunar cycles since Hindus have traditionally used a lunar calendar. As a result, the festival also falls on roughly the exact dates every year.

Every 12 years, the festival is celebrated with a Kumbh Mela. With attendees between 60 to 100 million, the Kumbh Mela is considered among the most significant social gatherings in the world.

The occasion is celebrated in various ways across India and is known by different names. Some standard practices include dances, bonfires, feasts, and fairs. Many participants may bathe in sacred rivers or lakes to offer thanks to the sun. We are here to help you explore popular variations of this festival that kick off the new year.

On Makar Sankrant Day in Maharashtra, it is common to exchange sweetmeats such as til-gul laadoo (made from jaggery and sesame seeds) and mutlicoloured halwa. Gulachi Poli/Puran Poli, a flat bread stuffed with shredded/soft jaggery mixed with ground white sesame seeds, then toasted in pure ghee, is offered for lunch.

Married women celebrate Haldi- Kunku along with friends and family. Guests will also receive til-gul and a small gift as part of the ritual. All will be dressed in black clothes since black adds to body warmth which is suitable for winter when Makar Sankrant is celebrated.

The distribution and exchange of sweets encourage people to instill a spirit of forgiveness while purging themselves of negative sentiments. To emphasize this motif, the famous line "til ghoul ghya aani god god bola." This means, "Eat this jaggery and sesame and utter sweet words."

The preparation of makara chaula is an integral part of the celebration of Makara Sankranti in Odisha. The preparation consists of uncooked rice that is newly harvested and mixed along with coconut, banana, sesame, jaggery, chhena (an Indian style of cheese) puddings, Khai/Liaa. This fare is then offered as Naivedya to the gods and goddesses.

The end of winter signals the changing of food habits and the intake of rich, nourishing food. For this reason, the festival holds special cultural importance in the state. It is also of astronomical significance to devotees of Surya who worship the solar deity at Konark Temple with enthusiasm as the sun begins its annual northward swing.

Makar Sankranti is very popular in Uttarakhand. It is known by different names across the state, including Khichdi Sangrand, Uttarayani, Ghugutia, and Pusyodia.

It is celebrated with notable gusto in the Kumaon region, where it is known as Ghuguti Tyar or Uttarayani. The well-known Uttarayani fair is held every January in Bageshwar town during Makar Sankranti. 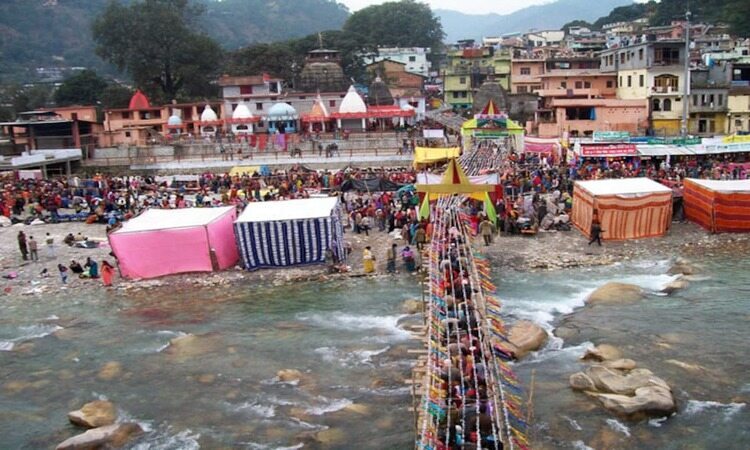 The religious ritual of the mela consists of bathing at the confluence of the Gomati and Saryu. After this, an offering of water is made to Lord Shiva inside the Bagnath Temple. The more religious devotees will continue this ritual for three days. This practice is known as "Trimaghi".

Other day activities include giving khichdi to charity, participating in Uttarayanu Fairs, and taking holy dips in rivers. Sweetmeats made out of flour and jaggery will be offered to crows and other birds to offer homage to the departed souls of ancestors.

Known as Pongal in Tamil Nadu, the festival is celebrated in four parts over four days. It begins on the month of Margazhi on the Tamil calendar till the third day of the following month of Thai. 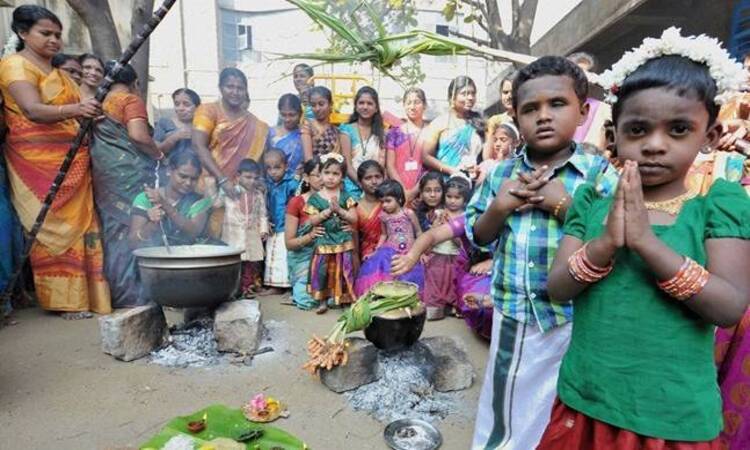 Bhogi marks the festival's first day and is celebrated by disposing of old materials and clothes. This is done by setting the aforementioned items on fire, marking the end of the old and the beginning of the new. A simple ceremony known as "Kappu Kattu", which means secure, is held in villages. Neem leaves are kept along the roofs and walls of houses. This is done to extinguish evil forces.

The second day is Thai Pongal. On this day, rice is boiled in new pots along with fresh milk and jaggery. These are later topped off with cashews, brown sugar, and raisins. This preparation is known as Pongal and lends its name to the festival.

The third day of the festival is known as Mattu Pongal, and offerings of thanks are made to cattle on this day. Cattle are decorated with paint, flowers, and bells and allowed to roam free as a gesture of gratitude for the help they provide to farmers.

Kaanum Pongal marks the fourth day of the festival, and on this day, people visit their friends and relatives to enjoy the festivities. It is a day to thank everyone for their support during the harvest.

In Assam, the end of the harvest season in the month of Maagha is marked by the celebration of Magh Bihu, also known as Bhogali Bihu. The festival here is celebrated with a week-long feast. 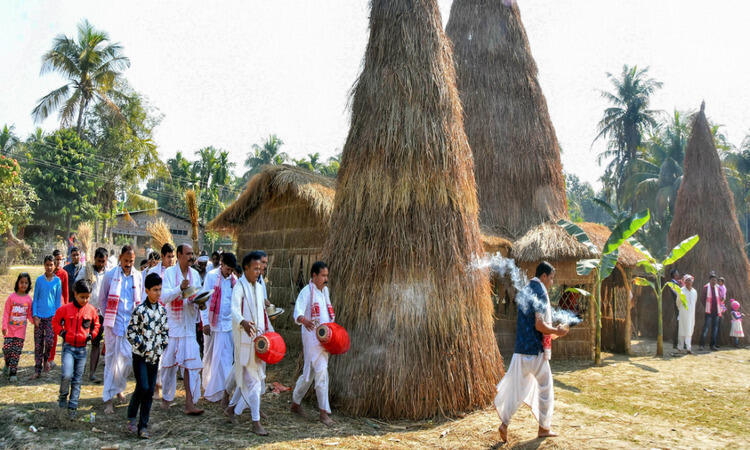 Makeshift Huts, known as Bhelaghar and Meji, made of bamboo, thatch, and leaves, are erected by young people. The feasts are enjoyed in the Bhelghar before they are burnt down the following day. Also featured as part of the celebrations are traditional Assamese games such as buffalo fighting and tekeli bhonga (pot breaking).

Magh Bihu celebrations typically begin on the month of Pooh, which corresponds to December, usually on the 29th, and generally carry on till January 14th. The night before the commencement of the festival (28th of Pooh) is known as Uruka. On this night, people will kick off the festivities by gathering around a bonfire to cook dinner and make merry.

Sankranti is known as Suggi by the farmers of Karnataka. On this day, girls don new clothes and visit near and dear ones bearing a Sankranti offering. These offerings are exchanged among families in a ritual called "Ellu Birodhu". 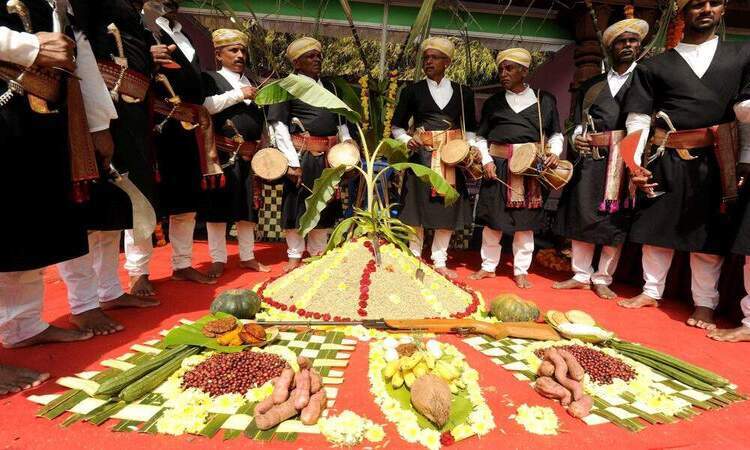 The plate usually contains a mixture known as "Ellu-Bella". "Ellu," which are white sesame seeds, are mixed with neatly cut dry coconut fried groundnuts and fine cut "Bella" (jaggery). The plate will also contain sugar candy moulds and a piece of sugarcane.

The Kannadigas have a saying during the festival, "Ellu-Bella thindu olle maathadi. This translates to "Eat the sesame seeds and jaggery mixture and speak only good", which many may find reminiscent of a similar saying in neighbouring Maharashtra.

The Bengali name for Sankranti is "Poush Sankrant", after the month it is celebrated. Special sweets such as Pithas, a preparation consisting of rice flour, milk, coconut, and "khejurer gur" (date palm jaggery) are made for the occasion.

The celebration lasts for three days and sees participation from all sections of society. In West Bengal, the occasion of Sankranti is primarily devoted to the worship of Goddess Lakhsmi.

The festival is called Magey Sakrati in the Himalayan regions around Darjeeling. Here, it is closely associated with the veneration of Lord Shiva. People traditionally bathe at sunrise before commencing the ceremonies and rituals.

The International Kite Festival, also known as Uttarayan is prominent among the 200-odd festivals celebrated annually in Gujarat. The festival heralds the arrival of Makar Sankranti, bringing much joy to the farmers of the land. 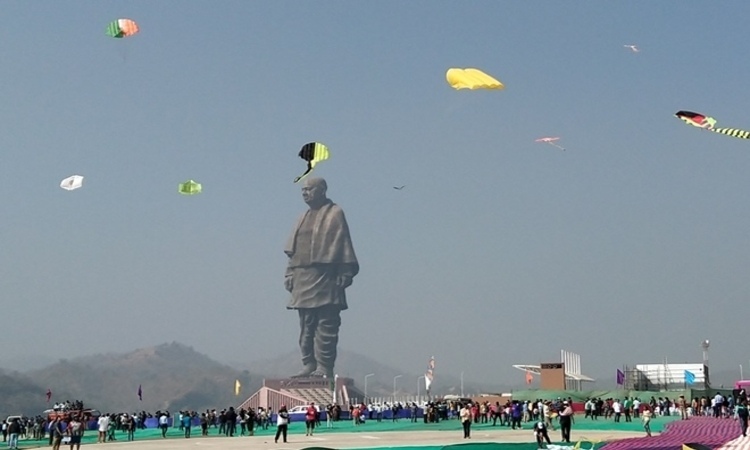 The major centres for Uttarayan include many cities in Gujarat and neighbouring states such as Ahmedabad, Surat, Vadodara, Jaipur, Udaipur and more. However, Ahmedabad is where the main kite festival is held. The most popular locations to enjoy the festival are the Ahmedabad Police Station and the Sabarmati Riverfront.

The occasion also sees markets flooded with buyers and sellers of numerous varieties and designs of kites. Patang Bazaar is among the most well-known markets for kites and is open all day and night during the festive week.

And it is not only the bazaars that see booming business. Many local families also set up small kite shops at their residences for the festival.

An Apt Celebration to kick off the New Year

Makara Sankranti may be considered one of India's most important spiritual practices. It is a festival that brings the cheer of a good harvest to ensure a great year ahead. As the start of a new cycle, its adherents celebrate the occasion on a sweet note.

The widespread consumption of jaggery and delectable sweetmeats and dishes on this day reminds us that our words and actions should be equally sweet. In addition to kicking off the new year on a fresh note, the festival also emphasizes the common traits that unify all people across the country, if not the world.